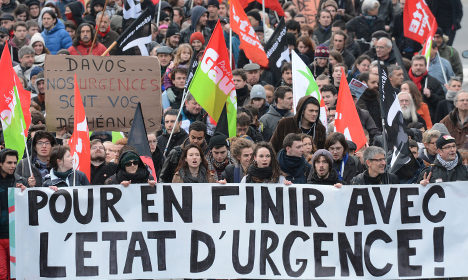 The state of emergency was imposed after gunmen and suicide bombers attacked a string of Parisian cafes and restaurants, a concert hall and football stadium, leaving 130 dead and hundreds injured on November 13.

It has led to over 2,500 police raids and hundreds of arrests under emergency policing powers that government wants written into the constitution.

The French Human Rights League (LDH), one of many bodies now questioning the efficacy of the harsher measures, said recently that only four legal procedures relating to terrorism had emerged from the spate of police operation

A demonstrator in Rennes on January 23, 2016 holds a sign reading “State of emergency, police state, no security, no freedom”

“The political trap of a state of emergency is closing on the government (because) there will always be a good reason to keep” it in place, said LDH lawyer Patrice Spinozi.

And Jean-Jacques Urvoas, the president of the parliamentary commission of laws argued that the “element of surprise” against potential terrorist networks has been “largely reduced”.

The Council of Europe's human rights commissioner Nils Muiznieks warned earlier this month that the state of emergency could constitute a “threat” to democracy.

And a panel of UN human rights experts said last week the measures placed what they saw as “excessive and disproportionate” restrictions on key rights.

The current three-month state of emergency expires on February 26 and an extension will give government time to adopt reforms to enshrine new security measures into the constitution,

None has been more divisive than a reform proposed by the Socialist president to strip French citizenship from people convicted of terrorist offences, if they have another nationality.

Rights activists, intellectuals as well as those within the Socialist party have criticised a measure they see as a betrayal of France's founding principles, in which the republic is “one and indivisible”.

France's National Human Rights Commission (CNCDH) said the loss of nationality was “of no use in the prevention of terrorist acts.”

The commission said it would establish “different treatment” between French people holding dual citizenship and those who are only French, a move “radically opposed to all republican values.”

A group of 70 non governmental organisations have called for a protest on January 30 against the measure.

“For us it is definitely non!” they wrote in a declaration.

Protesters march behind a banner reading “To put an end to the state of emergency” in Rennes on January 23, 2016

On Saturday the National Council of Bars, which represents French lawyers, said it was concerned to see the construction of “a judicial and social model which breaks with republican values”.

Prime Minister Manuel Valls told the BBC on Friday that France would “use all means” at its disposal to combat terrorism “until we can get rid of Daesh,” an acronym for Islamic State.

However, a source close to Valls told AFP “it is not envisaged in any way to extend it indefinitely.”

When asked about the government's intentions regarding the state of emergency, the source said simply that France was at “war”, hence “we shall see if we are going to extend it (for) as long as necessary.”

The state of emergency boosts police powers, allowing house arrests, raids both day and night and the banning of public gatherings, without permission from a judge.

The lives of the majority of French people have not been affected by the state of emergency, and a recent poll showed 70 percent of people wanted it kept in place.

But there have been cases of violence during police raids, mistaken identity and people losing their jobs because they were placed under house arrest.

For the first time on Friday the Conseil d'Etat — the highest administrative court — stopped a house arrest and fined the State as the person in question had not been proved to belong to an Islamist grouping.

The Conseil d'Etat will on Tuesday examine a request from the LDH to end the state of emergency.