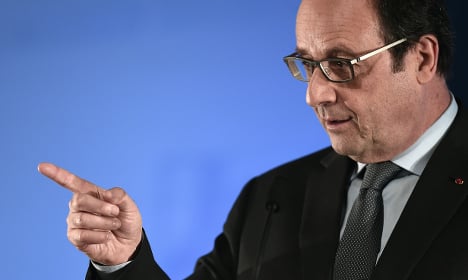 Hollande's office had said Wednesday that the government would decide within days whether to extend a three-month state of emergency put in place after coordinated jihadist attacks killed 130 in Paris on November 13.

UN human rights experts have criticised the current state of emergency, due to expire on February 26, for imposing what they see as “excessive and disproportionate” restrictions on key rights.

Prior to Laurent's comments, French Prime Minister Manuel Valls said France would “use all means” at its disposal to combat terrorism “until we can get rid of Daesh,” an acronym for Islamic State.

Following Valls' comments in an interview with the BBC on the sidelines of the World Economic Forum in Davos, his office told AFP the government had no intention of keeping the state of emergency in place for years.

“It is not envisaged in any way to extend it indefinitely,” sources close to Valls said after the prime minister said France had to use all means at its disposal to protect citizens.

When asked about the government's intentions regarding the state of emergency the source said simply that France was at “war,” hence “we shall see if we are going to extend it” for “as long as necessary.”

France is seeking to crank up its response to the threat posed by extremist groups with proposed constitutional reforms including the power to strip French citizenship from people convicted of terrorist offences, if they have another nationality.

The proposal has created divisions within the government and the country at large.

Earlier this week both the French Human Rights League and a group of UN rights specialists voiced concerns about the state of emergency as a means of curtailing public freedoms.