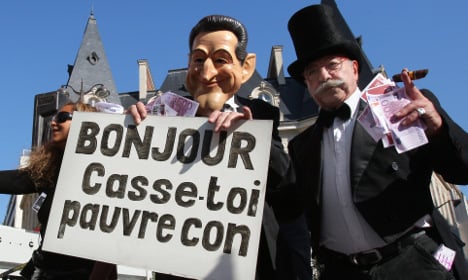 In his new book “France for life” (La France pour la Vie) which hits the shelves on Monday, Sarkozy revised a few infamous moments during his time as president.

In particular the memorable incident at the agricultural fair in Paris where he tried to shake hands with a farmer who responded: “Don’t touch me, you will dirty me.”

A clearly peeved Sarkozy hit back with the now classic line “Casse toi pauv’ con”, which roughly translates as “Piss off your poor idiot” although several different versions exist including: “Get lost you prat”. But looking back in his new book, which is being seen by many analysts as Sarkozy’s official launch of his bid for the presidency in 2017, Sarkozy admitted the error of his words.

“When one wants to be president one must consider, respect and be interested in everyone,” he writes.

“I myself was very wrong during a visit to the agricultural fair, to give in to provocation by responding to the individual who insulted me. It was a mistake, for he had the right to say what he wanted, albeit he didn’t have to say it like that.”

Sarkozy admitted the incident, which he still regrets today, “demeaned” the stature of the office of the French president.

“I learned the hard way that having a strong character does not allow you to do anything.”

Sarkozy also regretted a few other bad decisions, especially those made during his first few days of office after winning election in 2007.

His decision to hold a celebratory dinner at the plush Fouquets restaurant on the Champs Elysées before spending a few days sunning himself on the yacht of billionaire friend Vincent Bolloré were also on his “Wish I could turn back the clock” list.

It was after the yachting holiday that Sarkozy became known as the “bling-bling” president and became hated among a section of the population, which many believe was the major factor in his defeat five years later.

Sarkozy admitted it was a “boon to his adversaries”.

“I thought wrongly that five days on the boat of an old and faithful friend would help me save my family (Sarkozy divorced five months later).”

He described the story turned into a “personal and media nightmare”.

“Even today I wonder how I could have made such a bad error.”

Summarizing his gaffes at the beginning of his presidency, Sarkozy writes: “I stayed a few months too long as a man when I should have become the president immediately.”

The ex-president also listed his regrets in terms of policy, wishing he had done more to liberalize the 35-hour work week as well as having regrets about not tightening security in France.

Sarkozy is widely expected to run for president but he may find his way blocked by Alain Juppé, who polls suggest is the favourite to win the conservative party’s primary at the end of this year.