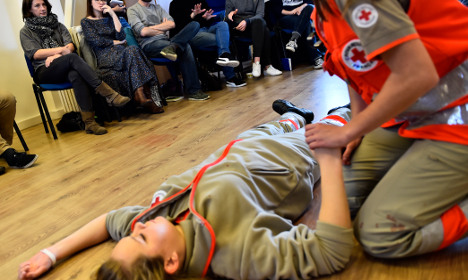 Parisians have signed up in their droves for first aid courses. All Photos: AFP

Marielle wobbles on her high heels as she practices dragging an injured friend out of danger and stemming a gushing
wound – part of her preparation for Paris's next terror attack.

Like many Parisians, the 30-year-old lawyer believes it is only a matter of time before the city sees a repeat of the devastating November attack in which jihadists targeted several nightspots, killing 130 and injuring hundreds.

Next time she wants to be prepared.

Marielle Tyranowicz has joined a special first aid training session developed by Paris firefighters after a rush of requests from citizens who stood by helplessly as their city was engulfed in terror.

“I think we will have more and more situations like the ones we have experienced, either mass attacks or individuals who attack, shoot… I don't see the future very positively,” she told AFP.

Two months on from the attacks, several cafes targeted by gunmen and suicide bombers have re-opened and the towering shrines of flowers and candles cleared away as the city tries to move on from the horrors of that Friday night.

But they also want to be ready, whether that means learning how to tie a tourniquet, or by coming up with new technological solutions to help overwhelmed emergency services during a disaster. As some practice chest compressions on a dummy, elsewhere in the city about 400 tech developers, computing experts and graphic designers are holding a “hackathon” to come up with innovative ways to handle a crisis.

Among the ideas to emerge from the young creatives: a messaging system in which the ambient noise, stress in the caller's voice and other markers are analyzed to allow responders to prioritize calls.

Another suggests an automated texting system in which citizens can log an incident without tying up human operators.

The conference is the brainchild of French web designer and businessman Jean-Francois Pillou who has called for the “Uberisation” of the anti-terrorism fight, using technology to sharpen the response of security and emergency services.

Many people reported difficulties in alerting authorities during November's attack – the fire service alone took 700 calls in 30 minutes – not helped by France's system of multiple contact numbers that dates back to the 1920s and is a frequent source of criticism.

“Start-ups are revolutionizing industry, why not the fight against terrorism?” Pillou asked in a Facebook post shared over 100,000 times in the week after the attack.

The hackers also look at possible tech solutions to radicalization, and ways to block false rumours spreading online during an attack.

“It is a world-first, it is the first time authorities and especially the police agree to ask the public for help… admitting they don't have all the solutions,” Pillou tells AFP.

Police promise to implement some of the ideas in the coming months. 'If you do nothing, someone will die'

Back at the fire station in Montmartre, Marielle is among the first to receive the free pared-down first aid course from the firefighters, who hope to train an initial 8,000 people with a few useful gestures that can save lives.

The course opens with a video of a chillingly familiar scenario: gunmen have attacked a sidewalk cafe and victims lie writhing in their own blood amid tables and chairs.

A woman goes from victim to victim, seeing how she can help: one is pulled out from under a table, another is dead – nothing can be done – and another requires a tourniquet.

“I think we have all understood,” instructor Guillaume says grimly. “This reminds us of what happened on November 13th.”

The idea is to equip bystanders with the skills to help in the crucial minutes before emergency services arrive.

“If you do nothing, the person will die. If you do something, even badly, he still has a chance” said General Philippe Boutinaud, who came up with the idea.

They get a quick lesson on wound compression, but are told that in “a situation with many victims, like an attack” where others may need help, they should rather use a tourniquet to stop blood flow.

“Use what you have available, a scarf, a piece of material,” says Guillaume as he teaches them to tightly wind the material above a wound.

“And it even applies to yourself, if you have been shot or stabbed,” he says.

Paris mayor Anne Hidalgo said the course and hackathon showed “a massive will from citizens in Paris to engage” in their community.

“Our society is there, standing tall, it will not let itself be affected by terrorists,” she said.