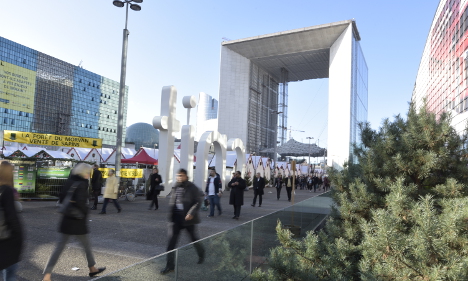 People walk near the "Grande arche" in the La Defense business district. Photo: AFP
The French military has combed through the social networks of jihadists and found details about an attack that could be “coordinated, simultaneous, and geographically spread”.
The information, published on Friday by France Info, lists seven landmark sites across France that could potentially be attacked, and even includes how the attacks would be carried out.
This includes a 9/11 style plane attack on the La Defense business district in Paris, a shooting at the European Parliament in Strasbourg, and a suicide bombing at Toulouse airport.
Other potential targets included the Saint-Nazaire Bridge in Brittany (pictured below), the port of Marseille, the European Museum of Lille, and hydrocarbon deposit sites in Lyon.
The information was gathered by analysis of text data from jihadist websites and social media, particularly of those under surveillance by the military's intelligence services. The Toulouse Blagnac Airport. Photo: AFP
Jean-Charles Brisard, the chairman at the Paris-based Center for the Analysis of Terrorism, said that such analysis – if credible – should be taken seriously.
“We've seen in the past that terrorists usually follow up what they write with action, so it's important to be aware of what they're saying,” he told The Local.
He added that he is expecting more complex attacks on France in the future as the terror networks evolve.
“We have seen an evolution in the modus operandi of these networks, starting with the attacks from individuals and sympathisers, moving on to complex operations from networks with large financing.”
The November attacks in Paris, he said, were a prime example of a coordinated and complex attack. They were carried out simultaneously and over a wide geographic spread, which is exactly what the military are preparing for across France, according to Friday's revelations.
Proof that the military is taking the information seriously can be evidenced by the fact that it carried out a counter-terror attack practice operation in the Feyzin refinery in Lyon just days ago.