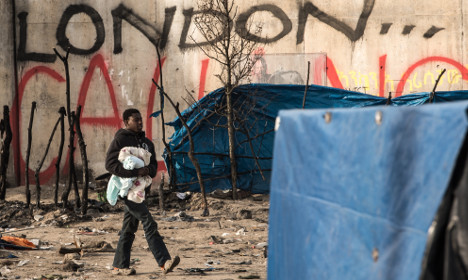 Family members greeted them as they arrived by train in St Pancras station in central London, where a crowd of about 100 demonstrators stood with yellow balloons and banners reading “refugees welcome”.

It came after judges on a British immigration tribunal on Wednesday ordered the interior ministry to allow the three teenagers and a 26-year-old, who have been living in the camp for over two months, to enter Britain while their asylum claims are considered.

Campaign group Citizen UK, which was involved in the legal action, said the four asylum seekers would arrive later on Thursday.

“We are delighted that the boys will be arriving to the safety of the UK and the care of their relatives tonight,” said George Gabriel of Citizens UK.

“They have endured terrible journeys contending with people smugglers and shocking conditions en-route, before the chaos and squalor of the 'Jungle Camp' in Calais,” he added.

Citizens UK members and other supporters were to gather outside St Pancras train station in central London “to show their support for the boys and their families.”

The tribunal judges cited European Union legislation, under which those who have a relative living legally in another European country have a legal entitlement to apply to seek asylum there.

Under the rules, asylum seekers should first claim asylum in France, but the judges agreed that bureaucratic failures meant this rarely happened, and that evidence of a written claim to asylum in France was sufficient.

“This judgment highlights that there are safe, legal routes to reconnect families using the Dublin III regulations, and we hope will allow other families to be reunited,” said Gabriel.

Ahmed, older brother of one of the boys, said he was “relieved and thankful that tonight I will be able to hold my brother, look after him and care for him.

“War is a terrible thing for anyone to endure, but particularly for children and young people,” he added. “No-one should have to experience the horrors of war.”

The interior ministry must now examine claims brought by refugees who have not yet received asylum in France, paving the way for further claims if other vulnerable asylum seekers can prove they have links to Britain.

The ministry said it would “study the full judgement in detail” before making its next move, which may include an appeal.

“We stand by the well-established principle that those seeking protection should claim asylum in the first safe country they reach,” it said in a statement.

“Any request to unite family members under the Dublin Regulation is carefully considered. Where someone seeking asylum elsewhere in the EU can demonstrate they have close family members legally in the UK, we will take responsibility for that claim.”

The tribunal's full judgement on the fate of the four asylum seekers is expected “within two weeks”.