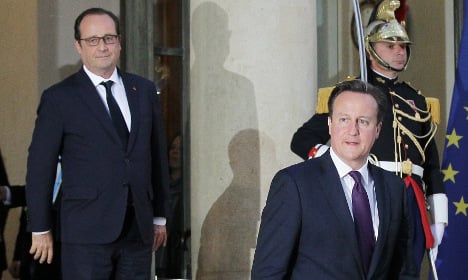 French President Francois Hollande said Thursday he would be “particularly vigilant” during talks with Britain while the PM Manuel Valls said the UK was unlikely to win over EU leaders in the next few weeks.

“The British government has made its demands… nothing is insurmountable so long as the founding principles of the union are preserved,” Hollande told a gathering of French ambassadors.

“France wants Great Britain to stay in the European Union – that's in the interests of Europe and the United Kingdom,” he said.

“But I will be particularly vigilant so that the eurozone can continue to deepen (its integration) – for me, that's the essential point.”

British Prime Minister David Cameron hopes to strike a deal on renegotiating its ties with Brussels at an EU summit next month, before holding a referendum on his country's membership of the 28-nation bloc.

French Prime Minister Manuel Valls also warned on Thursday that it would be a “very bad thing” if Britain left the EU, but warned that British demands cannot be met at any price.

A British EU exit “would undoubtedly be a bad thing, a very bad thing,” Valls told reporters on the sidelines of the World Economic Forum in Davos.

“There needs to be a deal, but not at any price.”

“Anything that allows us to simplify the organization of Europe, yes. Anything that throws into doubt the foundations of the European project or the eurozone, no,” said Valls.

Valls was speaking just hours before British Prime Minister David Cameron was set to lay out his vision of Britain's place in the world in a speech at the Swiss ski resort.

Cameron hopes to strike a deal on renegotiating Britain's ties with Brussels at an EU summit next month, before calling a referendum on the country's membership on the EU. He will campaign to stay in the union.

But French PM Valls said the British leader is unlikely to win over fellow EU leaders by the time of their February 18-19 summit in Brussels, at which France will be represented by President Francois Hollande.

An in-or-out referendum on British membership of the bloc will be held by the end of 2017, with commentators believing it could come this year if a deal is reached in February.

Britain needs the backing of France and Germany, the decisive powers in the EU, for any reform deal.

British Foreign Minister Philip Hammond on Tuesday said his government is willing to consider alternatives to one of its key demands for a four-year ban on top-up benefits for low-paid EU migrants working in Britain.

Critics in Europe say the proposal is discriminatory and threatens freedom of movement in the EU.

If a deal was struck next month, the referendum could take place as early as June.

But Hammond indicated it may not come before September if the agreement is delayed until March, as this would make organising a referendum for any earlier “very tight”.