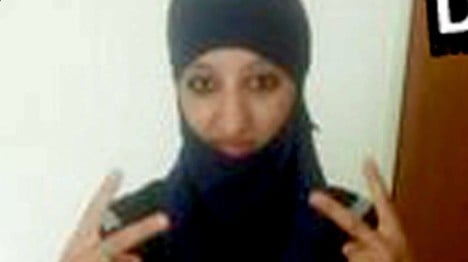 Hasna Aitboulahcen, whose family believe she was murdered by police. Photo: AFP

The family of Hasna Aitboulahcen, a cousin of alleged Paris attacks ringleader Abdelhamid Abaaoud who helped him on the run and died with him in a police raid, filed a murder complaint, their lawyer said this week.

Her family however believe she was an innocent victim.

A similar complaint has been filed by the family of the man shot dead as he tried to attack a Paris police station two weeks ago.

His father also believes his son was murdered by police.

Investigators probing the Paris attacks believe Hasna Aitboulahcen, 26, had found and negotiated rental of the safe house for Abdelhamid Abaaoud and his fellow jihadist.

The young woman was killed on November 18th, five days after the attacks, in a raid on an apartment in Saint-Denis, north of Paris, where police found her hiding, along with Abaaoud and fellow Belgian-Moroccan Chakib Akrouh, who blew himself up.

Aitboulahcen played a central role after the Paris attacks that killed 130 people, finding and paying for the hideout in Saint-Denis and leading her cousin to it.

But her family believe she was an innocent party.

“I consider that Hasna Aitboulahcen is a victim,” the family's lawyer Fabien Ndoumou said Wednesday.

“She was under pressure from her cousin who threatened her family and the families of her friends,” he said.

Her mother, sister and brother filed a complaint against persons unknown for terrorism and murder on January 13th with Paris anti-terrorist judge Christophe Teissier, according to a copy of the complaint seen by AFP. The same kind of complaint was filed by the father of Tarek Belgacem (see photo above), who was shot by police outside a police station in the 18th arrondissement of Paris on January 7th –  the one-year anniversary of the attack on Charlie Hebdo.

He had approached police with a meat cleaver and was wearing a fake suicide bomb vest. He also allegedly shouted “Allahu Akbar” (God is greatest).

Investigators say police had warned him not to approach, but when he ignored their calls, they opened fire.

Police said they found a handwritten note on his body in which he pledged allegiance to the jihadist Islamic State group.

“This version is contested by at least three precise and detailed witness accounts by residents,” Azaiez told a news conference. (Police inspect the body of Tarek Belgacem after he was shot. Photo: AFP)

Belgacem was killed for baring a weapon, Azaiez said, in what police considered legitimate self-defence. “Do you have the right to kill him because he showed a weapon?” the lawyer asked.

A legal source confirmed that the complaint of “voluntary homicide” had been lodged against persons unknown.

The father, Taoufik Belgacem, denied that Tarek was a jihadist, describing him as “normal, like all young people, a good person.”

He added: “They could have fired at him without killing him.”

A cousin, Ahmed Belgacem, charged that the note linking Tarek Belgacem to Isis had been planted to “hide a police error”.