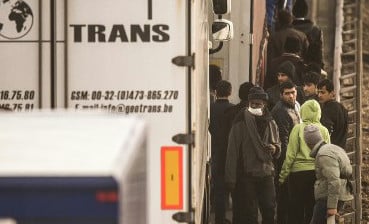 Some who have used the 500-euro ($550) smuggling service at a motorway rest stop near the northern French port of Calais, have found themselves heading in completely the wrong direction, winding up in lorries to Germany or Belgium rather than their dream destination of Britain.

“The guys who run it know the trucks where the driver is not around or sleeping, and they can get you inside,” said Adam Mohammed, a 30-year-old from Ghana.

“But they don't know the destination. They look for English number plates, but you are still taking a chance.”

One group of three young men and two women came back to Calais saying they had woken up in a French military base.

“They said the door opened and they had laser lights on their bodies because soldiers were pointing guns at them,” said Mohammed Adam, a Sudanese doctor, who is not related to the other migrant. “They were really panicked. They were handcuffed and police came and arrested them and brought them back here,” said Adam, speaking in the migrant shantytown on the outskirts of Calais known as the “Jungle” where thousands are trying to make their way across the English Channel.

The pot-luck method is far cheaper than the more organized smuggling operations that involve payments to lorry drivers.

Migrants and refugees can be expected to pay several thousand euros to guarantee passage to Britain, according to people working in the Jungle.

The Syrian was only in the Jungle for one night, compared with others without cash who spend months making repeated and fruitless attempts to dodge police and sneak through security barriers.

Britain has spent millions reinforcing security around the port and the cross-Channel tunnel in Calais, but some migrants still get through.

“Sometimes 10 will get through in one night, but then 10 days will go by with no one making it,” said the charity worker. 'People never give up'

The pot-luck option is reportedly run by a group of Afghans – who allow migrants a second chance if their lorry does not go to Britain.

“When they are in the truck, they try to feel if it is making a lot of turns because that means they are going through the roundabouts that lead to the ferry terminal, and they can feel if it goes up the ramp on to the ferry.

That is the only way to know,” said the doctor.

Many are discovered by border police and sent straight back to the Jungle, though a few are taken to jail.

“I spent a week in prison and they sent me to court,” said Solomon Vandy, a 25-year-old from Sierra Leone.

“It was horrible. People were so afraid and you can't use your phone so I did not know what was happening,” he said.

Vandy was not clear on his charges or why he was released, but he was now back in the camp, along with the thousands of others hoping to reach Britain.

“People never give up. They are fighting for their lives,” said Adam, the doctor. Another aid worker, who also asked to remain anonymous, said some members of the smuggling network had stopped charging money altogether.

“I spoke with one of the Kurdish guys who said he felt too guilty about taking money and was no longer taking a cut,” said the aid worker.

Those who organize the trips from the camp are widely known as “mafia”, although their role is simply to act as a middle-man between people in the camp and a smuggling network that is dominated by Albanians, according to several interviews with community leaders and aid workers in the Jungle.

Others said the existence of the camp and the smuggling networks were an inevitable result of British policy.

“The British government is making absolutely no attempt to accede to French demands and the refugees' demands to make it possible for people to claim asylum from here (in the Jungle). People can only claim asylum if they illegally cross,” said Tom Radcliffe, a British volunteer working in the camp.

“There are people here with perfectly legitimate asylum claims but they have to make an illegal action before they can be heard,” he said.