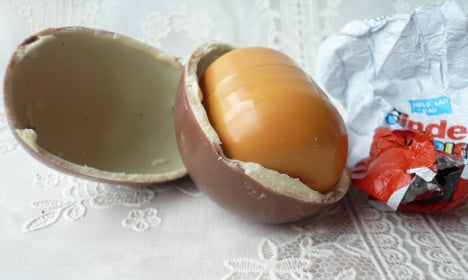 French police confirmed the cause of death was “airway obstruction” in an autopsy released on Tuesday.

The girl, aged three and a half, had been playing with her mother at Saint-Elix-le-Château in the suburbs of Toulouse when she opened the Kinder Surprise egg.

The eggs, launched 40 years ago, are popular with children because they contain miniature toys inside a plastic egg casing. The girl is believed to have put the little “toy with wheels” in her mouth but it became stuck in her airway and she was unable to breathe.

Firefighters were called out and according to reports they were able to resuscitate the girl but she was left with fatal brain injuries, that eventually led to her death at the hospital a short while later.

Kinder Surprise eggs, made by Ferrero, contain warnings to parents about the dangers of giving them to children under three. They are normally marketed at the five to ten age range.

They are actually banned in the US because of a law that forbids toys to be hidden in food because of the choking risks.

There have been calls in the past for the eggs to be banned after similar tragic accidents where children have choked on the toys.

Ferrero said that upon hearing the “sad news” of the girl's death, it was unable to confirm whether its Kinder brand had indeed been involved.

According to the Science Daily research news website, figures in 2010 showed a child will die every five days in the United States from choking on food.