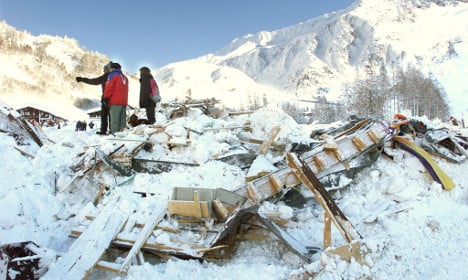 The carnage from a 1970 earthquake. Photo: AFP

The French Alps have played host to a horrific January so far, with two avalanches over the past week taking eight lives, including two high school students and five French Foreign Legionnaires.

Four others were swept away in separate incidents earlier in the month.

But the country is no stranger to deadly snow-slides on the slopes of the French Alps, where tens of thousands head each year to enjoy winter sports.

Here are some of the deadliest avalanches to take place southeastern French Alps. 1970 was a devastating year for winter holiday-makers in France. On the morning of February 10th, 42 people were killed and 60 left seriously injured when a devastating avalanche crashed into a hotel at the fashionable Val d’Isere ski resort in the northern French Alps.

The victims, many of them young people simply had no time to react. The then president Georges Pompidou declared it a national tragedy and ordered numerous other hotels to be evacuated amid fears of further avalanches.

Barely two months later, 71 died at Plateau d’Assy, in the foothills of Mont Blanc, although technically it was a landslide that caused the disaster, rather than an avalanche.

Among the victims were 56 children. A year after these tragedies, France created the National Research Association for Snow and Avalanche Studies to try to prevent further tragedies.

Nine young students between the ages of 13 and 15 and two chaperones were killed in an avalanche while snow-shoeing near Orres in the Hautes Alpes département. Their mountain guide was sentenced to two years in prison following the incident.

An avalanche left 12 people dead and 20 cabins destroyed in the village of Le Tour, near the popular Chamonix ski resort. This followed a snowfalls of nearly four meters in just 15 days.

Eight mountaineers, five Austrians and three Swiss, were killed in a huge summer avalanche on the north face of Mont-Blanc du Tacul in the Mont Blanc range. The snow slide was started by a chunk of ice that broke off from the mountain.

Three high-school pupils and their professional guide were killed in an avalanche while backcountry skiing near Valmeinier in Savoie. Weather conditions were bad that afternoon, with thick fog making it difficult for the rescue helicopters to reach the surviving students.

Nine international mountaineers were killed at Mont Maudit, in the Mont-Blanc massif, making it the deadliest avalanche in ten years. Among the victims were Swiss, German, British, and Spanish nationals.

Last year was another particularly dangerous one for skiers and mountain climbers. Six members of a French mountaineering club were killed on the Massif du Queyras, a mountain that claims about 30 victims each year.

Later in the spring, a dozen foreign skiers were swept down the Massif des Ecrins, a popular skiing and climbing location. Two Austrians and one Italian were killed. This came just eight days after another tragedy in the region, the shocking Germanwings plane crash.

A group of seven mountaineers died a few months later, also on the Massif des Ecrins. Four of the victims were German and three came from the Czech Republic.  Another German woman survived the avalanche but sustained a serious leg injury.

If you're a skier or winter mountain climber, have a look at our article on how to avoid deadly avalanches and what to do if you’re caught up in one.