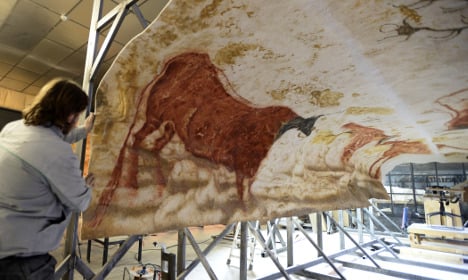 “Absolutely all the work you see on the wall has been engraved, worked and sculpted, chiselled by hand, with little paintbrushes and sometimes even tools used in dentistry,” said Francis Ringenbach, the artistic director of the project to replicate the 18,000-year-old Lascaux cave paintings.

The meticulously faithful copy of what has been dubbed the “Sistine Chapel of prehistoric art” is now ready to be transported one segment at a time – 46 all together – and installed just down the road from the original at a site semi-buried in a hillside in Montignac, in the Dordogne region. The International Centre of Parital (rock wall) Art, 150 metres long (500 feet) and nine metres high, designed by Norwegian architectural firm Snohetta, will open by the end of the year.

The caves, discovered in 1940 by four teenagers, quickly became a massive tourist draw, with around a million people flocking to see the work of the oldest known modern humans, who came to Europe from Africa via Asia.

Authorities closed them to the public in 1963 out of concern over the danger posed by humans to the delicate micro-climate.

A limited set of reproductions have been on display in Montignac since 1983, while Chicago's Field Museum hosted the first exhibit outside France of copies of the paintings last year titled “Scenes from the Stone Age”.

The 57 million-euro ($65 million) project to replicate the entire set has married cutting-edge technology with a desire for the utmost authenticity in the reproduction.

Ringenbach, himself a sculptor, says the need to be as faithful as possible to the original slowed the team down. The artists benefitted from 3D digital scans of the original paintings that were projected onto the walls, creating a task akin to using tracing paper as they applied layer upon layer of natural pigments.

Chief painter Gilles Lafleur said of the original works: “We try to understand them really, to understand how and why they were painted this way.”

But he admits that “time has taken its toll and these animals don't look the way they would have when they were painted. Time has had a visible impact, so we must also recreate that.” Ringenbach says he doffs his cap to the talent of our ancient forebears who only had rudimentary tools to create their masterpieces.

“They were extraordinary technicians, reproducing animal likenesses from memory with their highly vivid movements,” he marvels.

Reproducing the originals is, he says, a “magical” feeling.

Whereas the smaller-scale original museum could give only “limited insight” into the site's significance, “here, we reach a whole new level in terms of helping people to understand what Lascaux represents for science, the history of art, prehistory.”