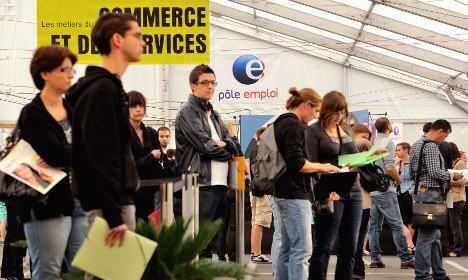 The Cour des Comptes, the body that carried out the report says France’s “assurance chomage” benefits system is simply not sustainable given record high unemployment and the system’s soaring debt.

The report comes at an opportune time with key negotiations between unions and labour bosses on the rules of the system set to begin in a matter of weeks.

The members of the council describe France’s benefits system as “very generous” compared to most other countries in the OECD.

In particular it points out that someone who collects unemployment benefit, or the chômage as it is known, can be eligible for compensation up to a maximum €6,200 a month – “the highest among comparable countries”.

Although it must be pointed out the number of unemployed people who actually benefit to the tune of €6,000 a month is a tiny, tiny minority. More to the point these high earners normally pay more into the system then they take out.

The chart below shows that in reality more than half of France’s jobseekers are handed €500 a month or less.

The report also pointed out the fact that the time limits on claiming benefits are some of the most lengthy in Europe with those under 50 being able to claim for two years, where as those over 50 can qualify for three years of benefits.

What makes these kind of benefits unsustainable, according to the Cour des Comptes, is the level of debt that is burdening the system.

The organisation Unedic which runs France’s unemployment benefits reports that the debt will reach €29.4 billion by the end of 2016 and €35 billion by 2018.

That's in part due to the fact that there are 750,000 more jobseekers claiming benefits than there were in 2008 and the average payment has risen by 7.8 percent in five years.

SEE ALSO: France should not be ridiculed for jobseeker benefits But relatively painless savings can be made, auditors argue.

They say that just by raising the age bracket from 50 to 55 – meaning thousands could only claim for two years rather than three – could mean a saving of €450 million.

Currently a jobseeker in France, who is single, claims on average 70 percent of their previous salary. Just by decreasing the percentage of a salary that can be paid out in compensation by one point would save €422 million, the Cour des Comptes argues.

And the auditors have also suggested a slight reduction to the sacred French ratio of “one day worked equals one day covered” (up to a maximum of two years) could save €1.2 billion

The council also wants employees to pay more into the system, given that the rate has remained unchanged since 2007. Just a 0.1 percent rise would reap €500 million, they say. Despite the urgent need to decrease unemployment, President François Hollande and his government appear unwilling to get involved, so far at least.

On Tuesday the ministry of labour stated that it was down to unions and company bosses to negotiate a solution.

But those unions who will take part in the negotiations appear dead against any changes that would see jobseekers lose out.

“There’s no justification for putting people in a more precarious position,” Alain Florin, from the CGT union told The Local.

Florin says the onus is on the government and businesses to find the money to reduce the debt.

“If the government can find €40 million to cut payroll charges for companies, which just ends up in shareholders' pockets, then it can find the same money for jobseekers,” he said.

“We have to remember that most jobseekers are on less than the minimum wage. This figure of €6,000 a month is just one picked up in the press.

“Remember these rules have been decided on after negotiations with business groups,” he said.

Florin says France’s system that offers “protection” to jobseekers should be valued rather than criticised.

Philippe Martin from France’s National Centre of Scientific Research predicts choppy waters ahead if any changes are to be pushed through in a time of economic crisis.

“Even if the government feels it has a legitimacy to pass a reform because many polls suggest the public agree, the unions will simply inflame the situation, there will be strikes and protests,” he told The Local.

“We will see conflict, just like always,” said Martin, adding that he doubts any “satisfactory” reform will take place right now.