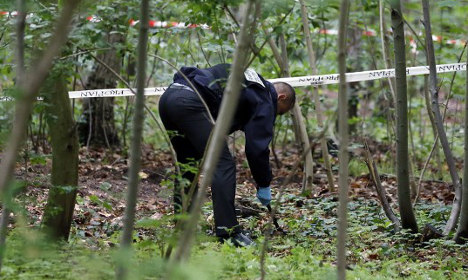 Police in the Vincennes forest look for evidence after bodies found. Photo: AFP

The baffling case first came to light in June 2012 when two women jogging in the Vincennes forest east of Paris stumbled upon a human leg “cut off at the ankle”, according to a judicial source. Two days later, a dog dug up part of a human torso.

Efforts to find the rest of the bodies were in vain, and all investigators could determine was that the body parts belonged to an Asian woman and man.

The discovery of the remains in the popular park came at the same time as Luka Rocco Magnotta, a Canadian convicted of killing and dismembering a Chinese student, was reported to have fled to Paris.

In an unusual twist, a Chinese couple turned themselves in to police just over a week after the macabre discovery, and admitted killing another Chinese couple, Ying Wang and her husband Liangsi Xu.

The woman, Hui Zhang, said she had been the couple's nanny.

She told police how one night several weeks earlier, she had found their two-year-old son Lucas dead, asphyxiated in his sleep.

She and her partner Te Lu decided to offer the child's parents money to try to get them not to report the boy's death. They invited the parents to their home, but said their plans quickly went awry faced with the fury of the grieving couple.

A fight broke out and the nanny said she grabbed a small axe and slashed at the couple, who eventually fell to the floor, dead.

Hui Zhang and Te Lu argue their actions were self-defence, saying the parents had attacked them with a butcher's knife. Te Lu was seriously injured in the fight.

Hui Zhang said she put the two bodies in the bathtub and cut them up with an electric saw, putting the washing machine on to hide any noise.

Then she and her partner got rid of the body parts, hidden in dustbin bags, and carefully cleaned the apartment.

The couple's confession led police to find further human remains in a dustbin bag in the forest, but not the body of the child, Lucas.

Hui Zhang said she threw his body, as well as the rest of the remains, into dustbins.

Psychological experts say Te Hu had no criminal leanings and Hui Zhang was “extremely intelligent” and dominated her husband.

While Lucas's grandfather told police the nanny gave the child sleeping tablets, other parents have described her as attentive and the case relating to the boy's death was dismissed.