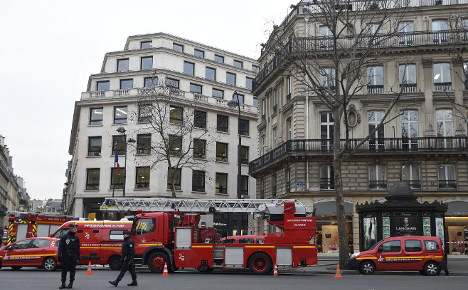 The fire broke out at around 6am in the top floor of the five-star hotel which stands on Place Vendome, one of the city's plushest squares.

“We are still not sure exactly what happened,” a spokesperson for the hotel told The Local, promising more information later in the day.

According to firefighters, the fire broke out on the top floor of the 159-room hotel before quickly spreading to the roof.

Some 60 firefighters and around 15 fire engines were dispatched to the blaze after the alert was raised, a fire service spokesperson told AFP. He said no one was staying in the luxurious five-star hotel and there were no casualties but a “large” part of the building was affected.

Some reports say most of the roof has been destroyed.

Around 15 fire trucks and 60 firefighters were said to be on the scene with residents and guests being evacuated from nearby buildings and hotels.

Roads around the hotel are currently blocked off as firefighters tackle the blaze. In images posted on Twitter smoke could be seen rising from the roof of the hotel. The hotel is currently unoccupied after having closed its doors in 2012 with refurbishment work having started over a year ago. It was due to re-open in July, 2014, but delays in the work meant the re-opening date had been put back to March this year.

The Ritz decided to undertake a major revamp due to increasing competition from luxury hotels.

The French company that won the bid for the renovations, Bouygues, is experienced in luxury hotel refurbishment, having worked on refittings for Fouquet's Barriere in 2006, and the Royal Monceau and the Shangri-La in 2010, among others.

In a statement made at the time of the hotel's closure Bouygues said: “The luxury hotel is to be totally refitted. This will encompass complete refurbishing of the decoration and renovation of the historic areas, while preserving the spirit of the iconic institution.”

It is not the first time the hotel has been hit by a blaze.

In 2012 a fire broke out in the underground car park of the hotel which led to Place Vendôme having to be evacuated as thick black smoke filled the air. The hotel of choice of Charlie Chaplin, Coco Chanel and Ernest Hemingway, where a small bar is named after him, the Ritz is also infamous as the place where Princess Diana and Dodi Fayed dined before their fatal car crash in 1997.