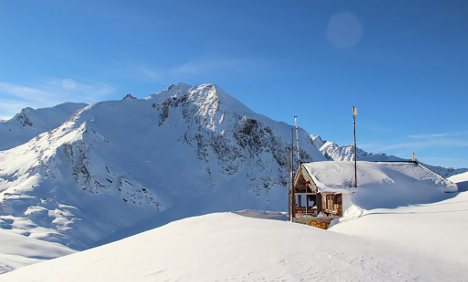 An undated picture shows the site of an avalanche that killed five Five French Foreign Legionnaires near the resort of Valfrejus. Photo: AFP
As well as the six fatalities, another five soldiers were injured near the resort of Valfrejus.
The avalanche hit around 2pm on Monday afternoon at Valfréjus, in the Savoie area, just a short distance from the Italian border.
The resort was closed following the avalanche to enable as many staff as possible to take part in the rescue mission. Three helicopters and sniffer dogs as well as specialist mountain police also took part in the search for survivors. Photo: Google Maps
Around 50 soldiers from the 2nd Foreign Engineer Regiment, based at Saint Christol, are understood to have been taking part in a training exercise in an off piste area at the time the avalanche struck, which was shortly before 2pm.
Eleven of the skiers were swept away by the deadly snow-slide.
The avalanche occurred near Le Petit Argentier peak at an altitude of 2,200 metres.
One ski instructor from Valfrejus, who was taking part in the rescue mission told The Local the avalanche risk in the area on Monday was at level 3, meaning there was a “considerable” danger of an avalanche occurring. The nationalities of the victims were not immediately known. The French Foreign Legion attracts recruits from around the world.
French Prime Minister Manuel Valls said “the country has been bereaved by the death of five of our legionnaires.”

Defence Minister Jean-Yves Le Drian would visit Valfrejus on Tuesday, according to reports.
The avalanche occurred just days after a group of schoolchildren were swept away in a separate avalanche at Deux Alpes, that killed two teenagers and one adult. Another four skiers were killed in the French Alps earlier in January.
The risk of avalanches in the Alps has been high in recent days after heavy snow falls were followed by strong winds, leading to unstable formations of snow high up in the mountains.