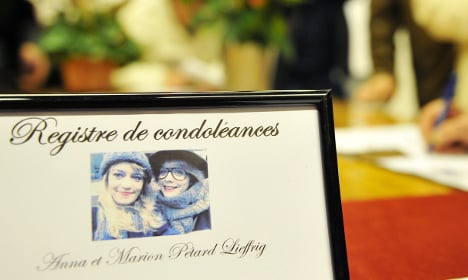 People sign a book of condolence to pay tribute to Anna and Marion Petard-Lieffrig. Photo: AFP

The elementary school will be built in the town of Monthou-sur-Bièvre, in central France's Loir-et-Cher, and is to be named after Anna and Marion Pétard-Lieffrig.

The two women, aged 27 and 24, were at the Petit Cambodge restaurant when they were killed, in a series of attacks that left 130 dead.

The sisters’ parents live in the village of just 500 inhabitants, where they run a butchers' shop.

On Saturday, the first stone of the new school was put in place and the town’s mayor, Michel Darnis, made the announcement about the name at the ceremony.

“It was proposed to rename a street in honour of the girls. Finally, the idea of giving their names to the school was passed unanimously by town officials,” the mayor said.

The women’s parents, Erick and Sylvie said: “We are touched by this decision. Our girls liked school. Marion had taught at the Beaugency music school.”

They added that the tribute would help preserve their daughters' memory, saying: “Through this initiative, our daughters will not be forgotten. A plaque will explain their short lives. We need the younger generation to be aware of what happened that day, to become aware of the dangers of radicalization.”