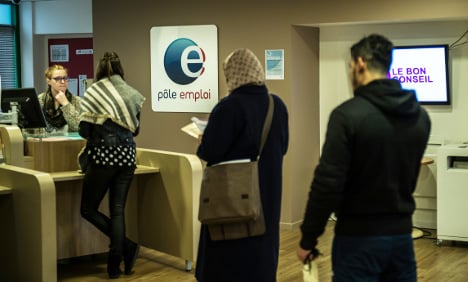 People queue at an unemployment office in France. Photo: AFP
He pledged to spend more than €2 billion ($2.2 billion) on a package of measures to fight France's stubbornly high unemployment, saying France was in “a state of economic emergency” and needed new measures urgently.
Unemployment, which stands at around 10 percent or 3.57 million people in the eurozone's second-largest economy, was the “only issue which ranks above security for the French people”, the president said.
Hollande said France needed to “increase the pace of reforms” and innovation was “key” to getting people back to work.
“France must also increase training, education and the level of qualifications of its workers,” he said.
The French economy has suffered after the jihadist attacks in November that killed 130 people and led to reduced growth in the fourth quarter.
Hollande has hung the success of his presidency on cutting rising unemployment in the country.
He said he would not stand for re-election in 2017 if his government didn’t manage to get unemployment down in time.
The French government’s effort so far have hinged on the Responsibility Pact, which was basically cutting payroll charges in the hope companies will step up recruitment.
His second move was a package of reforms aimed at opening up France's closed economy, including extending the number of Sundays per year when stores can open their doors.
But so far they have failed to reap any rewards.
Here is a closer look at Hollande's plan.
Reform of employment tribunals
One of the main problems identified with France’s labour markets is numerous and never-ending labour disputes that employers end up in when they try to fire a member of staff.
Many say the fear of spending two years in an employment tribunal is a major turn-off for smaller companies, who are therefore more likely to hand out temporary contracts rather than permanent ones.
In an attempt to fix this Hollande will promise to the time-limit for an employee to lodge a complaint of unfair dismissal, which currently stands at two years after they were fired.
And secondly the government wants to cap the amount of damages that can be handed out to an employee who was found to have been fired “without just cause”.
This idea had already been put forward in a previous set of reforms, but was rejected at the last minute because a plan to have different limits for employees in bigger companies was deemed unconstitutional.
SEE ALSO: Hollande entering 'money time' over jobless pledge Financial incentives for hiring
In a bid to encourage employers to hire more staff, Hollande plans to offer a “hiring bonus” to small businesses.
The plan is to give somewhere between €1,000 and €2,000 per worker who is hired with a salary of up to 1.3 times the national minimum wage.
The aim is to kick-start hiring by offsetting the social security contribution costs that may scare off employers, with Hollande's team deeming it to be much quicker than changing France's social contribution laws for low paid employees.
Laurent Berger, head of France's largest French trade union confederation CFDT, told French media that he's “not a fan at all” of the plan, which he thinks will prove to be too expensive.
Improve training for the unemployed
Hollande has already promised additional training schemes for some 500,000 unemployed people in 2016, the details of which will become clear on Monday.
Employment Minister Myriam El Khomri has said that the training schemes will target low-skilled workers, and will especially focus on growth sectors such as digital and environment.
The budget for training has been extended by €80 million in 2016.
This year's measures will cost €2 billion, which Finance Minister Michel Sapin said would be “compensated in full” by savings from elsewhere. Hollande promised that the measures would not be financed by tax rises.
A recent poll found that the majority of the French didn't think the emergency plans would work, with 77 percent of respondents saying they didn't think it would lower unemployment at all.
Simplify qualifications
The president like his economy minister Emmanuel Macron has recognized that in many cases in France, requirements for qualifications actually hinder employment.
“Qualifications can form barriers especially when they bear no relation to the tasks performed,” said Hollande.