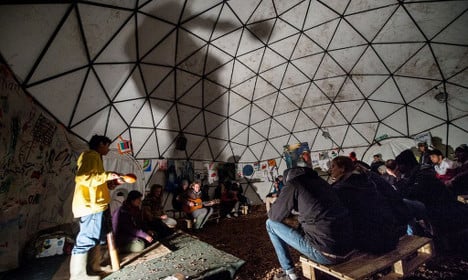 Migrants attending a concert in a makeshift theatre, in the so-called 'Jungle' migrant camp in Calais. Photo: Philippe Huguen/AFP

It's a chance to lighten the mood at a time when freezing temperatures have made conditions in the camp even grimmer for the thousands trapped here, looking for a way to reach Britain from the port city.

“I'm trying to find the voice and the feelings of the refugees,” says Hashemi, giving only his first name. “I want to share what is happening here with the whole world.”

Jungala Radio launched its first programme on New Year's Day via Facebook and Soundcloud and is gradually building a team of producers and journalists from the camp community.

One of their budding hacks is a 15-year-old Iraqi Kurd who has been living in the Jungle for three months.

He is enthusiastically hunting out interviews with one of the recorders bought by Radio Jungala via a crowd-funding campaign, though he says it is a tough gig.

“I like learning new things, but this is difficult. When I have to ask people questions, I feel a bit embarrassed,” he says with a smile.

But Kaiwan remains determined to make the most of his time in the camp, having already helped out in an aid distribution centre where he could practise his English and make friends.

“Everyone wants to go to the UK, but it's very hard and we need something to do while we wait,” says Kaiwan, who learned his English watching Harry Potter and Hollywood action movies with his older brother in Kurdistan.

As the French and British increase security around the port, and smuggling aboard lorries and trains has become ever-more difficult, the Jungle has taken on a more permanent feel.

A high street of shops, restaurants — even a nightclub and barber shop — have sprung up as tents have been replaced by semi-permanent wooden shacks.

But the Jungle is still a place of filth, boredom and desperate frustration, so volunteers and charity workers try to take the edge off with entertainment and education.

Next door to the well-stocked Jungle library, a volunteer is struggling to teach some basic French to a small group of Sudanese and Afghans — a sign that at least some people in the camp are now considering asylum in France rather than Britain.

The young volunteer shows heroic patience as she tries to explain the word “bienvenue” (“welcome”) — a word that her pupils have rarely heard since arriving in Europe.

On the other side of the camp, a young Afghan is on stage in the large white dome of the Good Chance Theatre, giving an impromptu song and dance performance while a visiting British artist jams on the guitar.

Since launching a few months ago, the theatre has evolved in surprising ways — such as the Eritrean circus troupe that come to teach and practise their tricks and backflips a few times a week.

A member of the Iranian national kung fu team gave lessons here for a while, and his mantle has been taken up by another karate expert from the camp.

“We don't shape what goes on, and we don't dictate whether you come to confront your situation or escape from it, or just to have a bit of fun,” says Joe Robertson, one of two British friends who helped set up the theatre.

“Many people have come here who are down,” adds his co-organiser Joe Murphy.

“Being part of a creative theatre community has turned them around and given them a role to play, which is hugely important for their mental well-being.”

Back at Radio Jungala, Hashemi is putting the finishing touches to his music show with the help of Ciaran Henry, a 22-year-old media graduate from Britain who helped launch the initiative.

“We are only here for tech support and constructive criticism. We want the people here to take ownership and control of it,” says Henry.

“I never thought of doing radio in my life, but now I hope to do more,” he says. “I'm just trying to be the best that I can.”