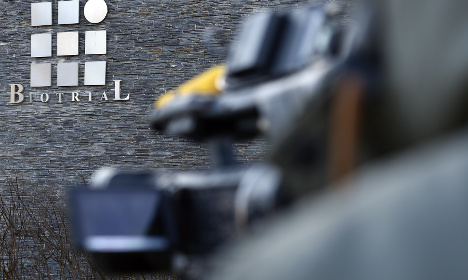 The incident is the worst of its kind ever to have taken place in France. Photo: Loic Venance/AFP

Five other volunteers hospitalised a week ago when the drugs trial went wrong were “in a stable condition”, the hospital in the western city of Rennes said in a statement.

The private laboratory Biotrial was testing a new pain and mood disorder medication for Portuguese pharmaceutical company Bial on humans for the first time, in what is known as a Phase I trial, to test the drug's safety.

A total of 108 volunteers took part in the trial, 90 of whom received the drug while the rest were given placebos.

The six men who were hospitalised were the group which received the highest dose.

Pierre-Gilles Edan, head of the neurology department at the Rennes hospital said Friday that three of the men were suffering a “handicap that could be irreversible” and another also had neurological problems.

“The 84 other volunteers exposed to the drug” have been contacted, said the hospital. Ten of them came in to be examined and did not have the “anomalies” seen in the hospitalised patients.

The incident is the worst of its kind ever to have taken place in France, and such mishaps are rare during drug trials.