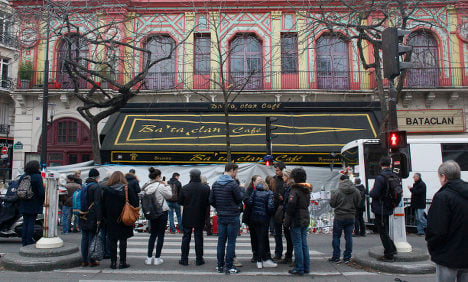 90 people were killed at the Bataclan in the November attacks. Photo: Matthieu Alexandre/AFP

The 35-year-old, who has asked that he not be identified, is a guard at the venue and twice went inside to help terrified people get out as gunmen were killing concert-goers.

In all, 90 people were killed at the Bataclan and 40 died elsewhere in the November attacks on the French capital that shocked the world and were claimed by the Islamic State jihadist group.

“He could have run away upon hearing the gunfire, given he was outside,” read the text on a change.org petition. “But he chose to enter to warn spectators and lead them to the emergency exits.”

The man, who has been identified only as Didi, was praised in the petition for having “saved dozens of spectators”. It called for him to be naturalised as a French citizen.

The online petition was launched by Thiaba Bruni, spokeswoman for France's Representative Council of Black Associations.

“Throughout all the horror of the situation, I saw, for the first time in my life, a real hero,” wrote Myriam Peron, one of the petition's signatories.

“So if there is a chance to thank him, we must seize it. I am honoured he wants French nationality. We should all be. Thank you, Didi.”