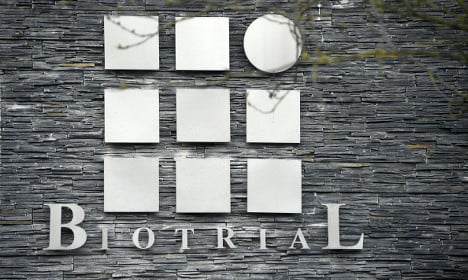 Judicial police late Friday carried out the first searches at the Biotrial lab which had performed the trial on behalf of Portuguese pharmaceutical company Bial.

On Saturday they were joined by representatives of France's social affairs inspectorate general (IGAS) and the national drug safety agency (ANSM).

The probes are seeking to determine if the tragedy was caused by an error in the trial's procedures or in the substance tested, a new drug meant to treat mood disorders such as anxiety.

A total of 90 volunteers — healthy men aged between 28 and 48 — were given the experimental drug in the Phase I trial. Six of them were taken to hospital last week.

Pierre-Gilles Edan, head of the neurology department at the hospital in Rennes where the volunteers were taken, said Friday that aside from the man who was brain-dead, three others were suffering a “handicap that could be irreversible” and another also had neurological problems.

The CHU university hospital in Rennes, where the six are being treated, on Saturday said they remained in a stable condition, adding that its staff were “fully and constantly mobilised” to attend to the victims and their families.

“Social and psychological care has also been put in place,” the hospital added in a statement, noting that legal support has also been offered to the victims and their relatives.

“All of the volunteers are being contacted,” it said.

The head of Biotrial said Saturday the lab was cooperating with the investigators.

“Our thoughts remain with the victims and their families but our energy this morning is entirely committed to assisting the investigators and to fully cooperating in the investigations under way,” Francois Peaucelle told journalists at a press briefing at the site.

The investigators and inspectors “are trying to understand…. what could have happened and how it could have resulted in such a tragic situation,” he said.

Representatives from Bial were also on site and taking part in the probes with “total transparency”, according to Peaucelle.

The Portuguese firm issued a statement on Friday insisting it had followed “international best practice” in developing the drug and said it would cooperate with the investigation to “determine in a rigorous and exhaustive manner” what had happened.

France's national drug safety body confirmed it was the worst ever incident to have taken place in a drugs trial in the country.

Each year thousands of volunteers participate in clinical drugs trials and experts point out that tragic results are rare.

But the incident in Rennes has raised concerns about such experiments.

A university teacher in Rennes who has participated in such trials told AFP he would not do it again.

“I will not do it any more and I'm going to advise against it,” said the 33-year-old, who requested anonymity.

He admitted to being attracted by the “easy money” participants received and that he had taken part in about 15 trials at the Biotrial lab since 2005.