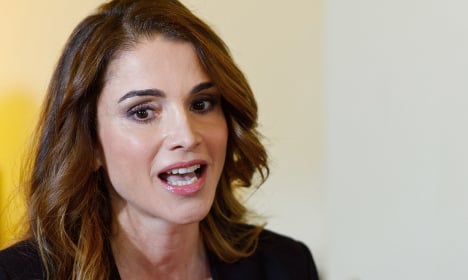 The cartoon shows a pervert chasing a woman, with the caption asking: “What would have become of small Aylan if he grew up?”

“Someone who gropes asses in Germany,” it added, referring to the multiple acts of sexual assault blamed on migrants on New Year's Eve.

In response Queen Rania posted a cartoon on Facebook and Twitter by Jordan's Osama Hajjaj depicting the little boy lying face down on the beach alongside an older child with a backpack and finally a doctor.

The queen added the caption: “Aylan could've been a doctor, a teacher, a loving parent.”

Aylan's father says he wept when he saw a cartoon depicting his son as an adult involved in sexual harassment, and said on Saturday that the family is “in shock.”

“When I saw the picture, I cried,” Abdullah Kurdi told AFP by telephone, adding: “My family is still in shock.”

The magazine, contacted Thursday by AFP, declined to comment.

On January 7, 2015, jihadist gunmen killed 12 people in an assault on the Paris offices of Charlie Hebdo, which had been a target since publishing cartoons of the Prophet Mohammed in 2006.