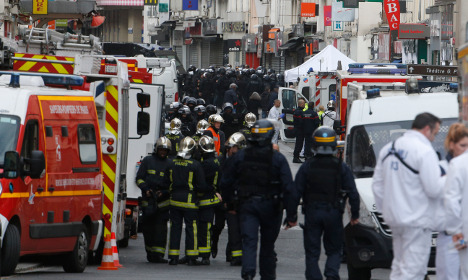 Photo: AFP
Chakib Akrouh, 25, was identified from DNA matched to his mother, Paris prosecutor Francois Molins said in a statement.
“The suicide bomber who blew himself up… was identified as Chakib Akrouh, born on August 27, 1990 in Belgium, of Belgian Moroccan nationality,” Molins said.
Akrouh had been holed up in an apartment in the northern Paris suburb of Saint-Denis with the suspected ringleader of the Paris attacks, Abelhamid Abaaoud, who was also a Belgian of Moroccan origin.
A French woman, Hasna Aitboulahcen, who is thought to have been Abaaoud's cousin and may have been in a relationship with him, was also there at dawn on November 18, five days after the attacks, when police tried to storm the building.
All three died after Akrouh detonated the suicide vest and police rained heavy gunfire on the building.
Prosecutors initially mistakenly said the woman had been the suicide bomber, before correcting their account.
Hunt for key suspect
The delay in identifying Akrouh points to the devastation left after the massive raid that sent explosions ringing through the area while terrified residents were told to stay indoors.
Investigators now believe he was also one of the Kalashnikov-wielding gunmen who sprayed restaurants and cafe terraces with bullets on November 13, killing dozens of people.
A separate trio of attackers stormed the packed Bataclan concert hall and killed 90 people who had been enjoying a gig by Californian rock band Eagles of Death Metal.
Earlier, three men had blown themselves up outside the Stade de France national stadium while France were playing Germany in a football friendly.
A total of 130 people were killed and more than 350 were injured in the attacks that were claimed by the Islamic State (IS) group in revenge for French air strikes on the jihadists in Iraq and Syria.
Abaaoud, 28, was an IS fighter who was previously thought to be in Syria after fleeing raids in his native Belgium.
The prosecutor has said he believes Abaaoud was using the apartment to prepare an attack on Paris' La Defense business district on either the day of the raid, November 18, or the day after.
Abaaoud was traced to the hideout in Saint-Denis through a mobile phone found abandoned in a bin outside the Bataclan and through calls made by the woman, Aitboulahcen.
Investigators are still seeking Salah Abdeslam, a 26-year-old Frenchman living in Belgium who is thought to have hired the cars used by the attackers and arranged hotel apartments for the nights before the rampage.
A new video emerged this week, showing Abdeslam at a motorway service station near the border of France and Belgium hours after the attacks.
The two accomplices with him were arrested and have admitted taking him back to Brussels, but Abdeslam has evaded capture.
According to Belgian media, a court in Belgium sentenced Akrouh to five years in jail in absentia last July in a case linked to a jihadist recruitment network sending fighters to Syria.
Abaaoud was sentenced to 20 years in the same case, also in absentia.