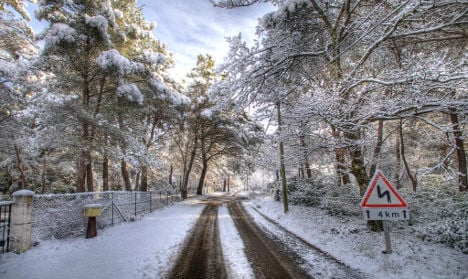 Photo: marcovdz/Flickr
Weather agency Météo France issued an “orange alert” on Friday for the départements of Meurthe-et-Moselle, Moselle, and Bas-Rhin – all in the north eastern corner of France.
Further alerts for snow and ice were then issued for another eight départements in the region: Ain, Doubs, Isère, Jura, Loire, Meuse, Rhône, and Vosges (see map below).
It predicted “significant amounts” of snowfall or sleet – up to 15 centimetres in fact – to fall in the area throughout Friday afternoon and into the evening.
Snowfall is forecast to spread into nearby départements, including in Burgundy, but not enough to warrant an alert.
The agency warned for potential traffic difficulties and urged motorists to be careful on the roads.
An orange warning is the second highest warning level and asks the public to be “very vigilant”. Meanwhile in the north west, residents were hit with their first snow of the season overnight.
The snowstorm wasn't enough to prompt a warning from the Météo France, but the slippery roads have caused a few problems for motorists, reported Ouest-France newspaper.
The rest of the country is expected to get chilly too as a cold front moves in over the coming days, with snow tipped for the Paris region over the weekend.

“It’s going to be a real cold spell, although it won’t be a long cold spell,” said a Météo France forecaster. “It will mark an abrupt change from temperatures in recent months. People may be surprised.”

The cold spell is forecast to end next Thursday, and may see temperatures as low as -9C in the east. Those in the west of France wasted no time in sharing pictures of the white stuff on social media. Here is a selection: