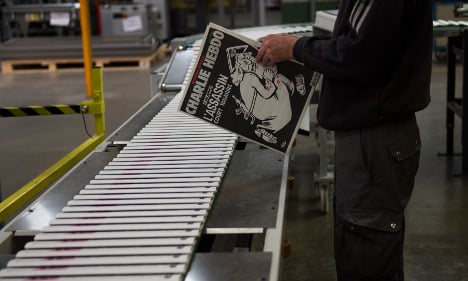 Charlie Hebdo editions at the print works. Photo: AFP
In the latest issue of the weekly, cartoonist and head of the magazine, Riss, sketched a pervert in pursuit of a woman under a banner that reads, “What would have become of little Aylan if he grew up?”
“Someone who gropes asses in Germany,” Riss added, alluding to a rash of crime targeting women at New Year's festivities in Cologne that has been blamed on migrants.
The cartoon was designed to highlight the West's inconsistent views towards refugees which verge from an outpouring of grief towards a drowned boy to labeling them all as sex pests after the Cologne New Year's Eve sex attacks.
Nevertheless it proved not to be to everyone's taste and caused a vocal outpouring against the magazine, including from Tima Kurdi, Aylan's aunt.
“It's disgusting,” she wrote in a Twitter message about the cartoon.
Tima Kurdi, who recently helped her brother and his family to resettle in Canada, also told public broadcaster CBC: “I hope people respect our family's pain.”

Disgusting cartoon in Charlie Hebdo (“what would've become of Aylan had he grown up? A groper”) via @faizaz pic.twitter.com/iB4myFb1ke

She explained that Aylan Kurdi's death “was a big loss to us. We're not the same anymore after this tragedy.
“We're trying to forget a little bit and move on with our life,” she said, but the Charlie Hebdo cartoon brought it all back into focus.
The drawing has triggered sharp criticism on social networks, with many decrying the magazine's lack of sensitivity. Social media users flooded Twitter to say that Charlie Hebdo had taken it one step too far this time.
Others argued that the magazine wasn't pointing the finger at refugees — rather at the West's reactions.
British newspaper The Independent called the image one of Charlie Hebdo's “most powerful and important“, writing:
“This is such a ridiculous thought that we must laugh at it. The cartoon isn’t an attack on migrants. It’s an attack on our own fickleness.”
Although much fewer in number, some social media users took to explain the magazine's absurdist humour.

#CharlieHebdo was mocking the very ideas critics claim they are espousing. Research!

If you think the Hebdo cartoon is tasteless, fine. If you think it 'mocks Aylan Kurdi' you should give up on irony: https://t.co/Y9wlIRGWp0

In Paris, contacted Thursday by AFP about the controversy surrounding its cartoon, the newspaper did not wish to comment.