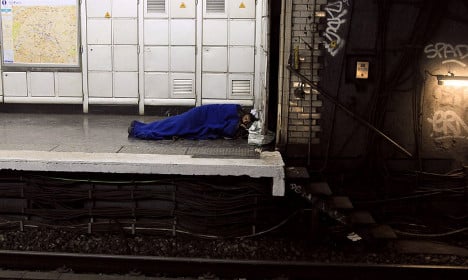 Photo: AFP
The senators, Alain Fouché and François Bonhomme, penned a 50-page report detailing how security on the French rail network is lacking.
A particular focus was on the Paris Metro, where they claimed the 300 homeless people who sleep in the stations at night are a prime cover for terrorists.
“Terrorists can get in by blending with the homeless people that sleep in the Metro at night, then seize the opportunity to carry out any number of attacks,” they wrote.
They added that a potential terrorist could sabotage the stations or install explosives.
To prevent this, the senators called to prioritize a housing option for the homeless community living at the stations, stressing that it wasn't a case of “chasing them out”.
If a housing solution can't be found, the senators recommended a stronger physical security presence on the ground, or better CCTV coverage.
The senators had several other proposals to improve safety on French trains, including more checks on luggage and passengers, and giving more power to railway police and security services.
France's rail security was thrust into the spotlight in August last year when a Thalys train from Amsterdam to Paris was attacked by a heavily armed man in August, but he was overpowered by passengers.
Since then, airport-style security gates at a cost of €2.5 million a year were installed at Paris Gare du Nord, but experts said they were nothing but a waste of money and dismissed the measure as pure “terror theatre”.

Photo: AFP
The two senators agreed, adding that the gates were also a waste of time for everyone involved. They suggested similar gates, but which could be moved to random locations.
They also echoed French transport authorities' calls in December for new software to help single out suspicious passengers by detecting the warning signs in their behaviour.
This includes technology that monitors suspicious luggage, and tracks changes in body temperature, raised voices and jerky body movements that can indicate heightened levels of anxiety.
SNCF is also looking into equipping its staff with wearable cameras to identify fare dodging or suspect behaviour, and in the spring it will launch an app that allows passengers to raise an alert from their smartphones.