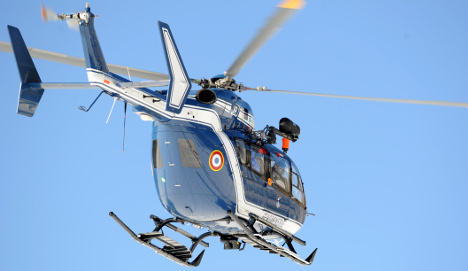 Photo: AFP
The avalanche at the Deux Alpes resort on Wednesday claimed the lives of two teenage pupils and a Ukrainian man, who is understood to have been skiing separate from the school group.
The snow engulfed 19 pupils in all and three staff members from the Lycée Saint-Exupéry de Lyon. Three pupils have been left in a serious condition.
The others were saved after a mammoth rescue effort involving helicopters and sniffer dogs.
But among the tributes to the victims, others have been left in disbelief as further details of the tragedy emerge.  Many are asking questions about the actions of the teacher, who was left unconscious in the snow-slide.
Reports say that it was his idea to take the closed sky run. On Thursday afternoon the teacher was formally placed in police custody on suspicion of causing multiple manslaughter.
Local mayor Stephane Sauvebois said “foolhardy risks were taken” when the group ventured onto the closed piste
“How can you think of taking children, following periods of heavy snowfall, onto a piste which was closed?” French Minister for Youth and Sports Patrick Kanner told reporters.
“A judicial inquiry will say why the teacher who was himself injured took (the group) onto a piste which was not open,” he added.
It's emerged that the piste has been closed to the public since the start of the ski season and representatives of those in charge of Deux Alpes have insisted that the piste was definitely closed off with “netting” in place.
The local prosecutor Jean-Paul Bonnetain said it would have been impossible for the group to have taken the slope by mistake.
“No one could say they didn't know it was closed,” Bonnetain said.
The video below shows search teams looking for possible survivors of the avalanche.
The risk of avalanches in Alps has increased after heavy snow falls in recent days were followed by strong winds. That has led to unstable formations of snow high up in the mountains.
Authorities and police have issued multiple warnings in recent days. A student lights a candle at the Lyon high school. Photo: AFP
Dominique Letang of the National Association for the Study of Snow and Avalanches said it was “infuriating” that anyone was skiing on the slope in the first place.
“What is surprising is the number of people involved, even though we keep on saying that they must take it one at a time when the snow cover is unstable,” he said.
“There is a good chance that it was the skiers themselves that triggered the avalanche”.
He added that the avalanche risk on the black slope – the highest difficulty rating in France – was three on a scale of five.
One skier who descended the piste before the group of school children said he saw the signs warning that it was closed but decided to take it anyway.
“You could feel that the snow had just fallen and it hadn't had the time to pack down. It wasn't solid,” the skier called Ryan told BFM TV. (Rescue teams gather for search and rescue operations on a piste at the avalanche site. Photo: AFP)
Investigators believe the avalanche was triggered either by noise or it was simply spontaneous after the heavy snow and high winds left unstable snow slabs high up above the slopes.
Early reports suggested the snow-slide began at an altitude of 2,800 metres while the ski party was 400 metres below.
The avalanche was around 20 metres wide and 300 metres long, according to authorities.
“It's typical of a slab of snow formed by strong winds in recent days,” said Letang from the National Association for the Study of Snow and Avalanches
The dangers of straying from open ski slopes in the French Alps have made headlines twice this year, after four skiers died in separate avalanches after going off piste.
Authorities in the Alps have called on those practicing winter sports to take the necessary precautions so as not to put their lives in danger.
Following Wednesday's tragic accident, French Interior Minister Bernard Cazeneuve released a statement repeating his appeal from earlier in the month for people in the area to “exercise the utmost caution” and to follow the instructions of the local authorities.