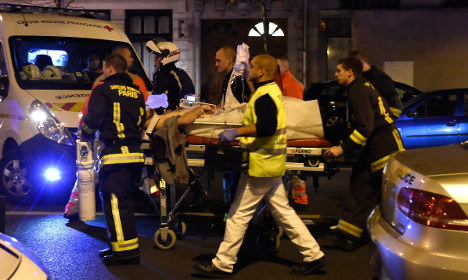 An injured person is taken away from the Bataclan venue on the night of November 13th. Photo: AFP

The Ministry of Health revealed the latest figures on Thursday.

Out of those 51 three remain in a serious condition in intensive care. Another 25 are receiving specialist rehabilitation care.

There have been some miracle stories of recovery among those whose bodies were left riddled with the bullets fired by the gunmen.

In early December, around one month after the attacks, 31-year-old singer Laura Croix, who was hit six times in the attack at the Bataclan, awoke from her coma to say her first words.

“She asked me if I was OK, and if her dad was OK too,” the mother told La Voix du Nord newspaper.

Croix was hit by six Kalashnikov bullets, three in the chest and three in the abdomen. She was severely wounded and lost two fingers from her left hand, and fractured her arm and hip.

Shrapnel from the bullet was lodged between her lung and heart, and she has undergone seven operations. She was put in a medically-induced coma for the first two weeks of recovery.

France's health minister Marisol Touraine has asked for a report on the effectiveness of France’s emergency health services on the night of the attacks.

Touraine wants to make sure the treatment of victims from the moment they receive first aid on the site to when they arrive in hospital is more effective.

She also wants the emergency response system for the victims to be at the same level all around the country as it is in Paris.