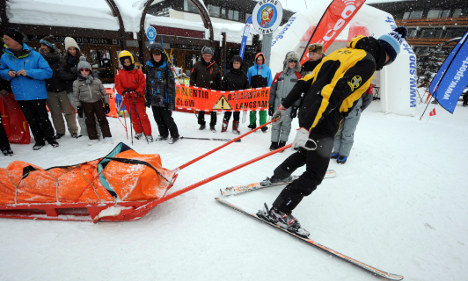 French police and the government were forced to repeat those warnings once again on Thursday after it emerged the school party was swept away by the avalanche as they skied down a closed run.

Why are the dangers so high?

The alert level in the Deux Alpes resort, where the accident happened, was at three out of five, meaning a significant danger.

But elsewhere in the Alps it is at level four which means avalanches are likely.

The reason for the raised alert is the combination of a number of factors including a lack of snow earlier in the season.

Philippe Descamps, former editor of France’s Mountain magazine, said the risk is always higher in the seasons when there is little snow.

When the snow finally does come, as it has done in abundance in recent days, then recent layers are fairly fragile and can break off with relative ease.

Frederic Jarry from France’s National Association for the Study of Snow and Avalanches told The Local on Thursday that the recent heavy snow and strong winds have created huge slabs of snow that are unstable and dense and can easily be disturbed.

“The avalanches can be triggered naturally after a build up of snow or simply by the actions of one person,” Jarry said.

So with the weather conditions creating unstable and dangerous snow slabs above 2,000 metres, how can skiers avoid the dangers? “When the warning level is at three, then novice skiers shouldn’t even think about going off piste,” he said. “They will not be able to analyse the dangers around them.”

“And even those who are more experienced need to make sure they are fully equipped, including with a GPS, and aware of their surroundings.

“You can’t just go skiing anywhere. The steepest slopes are the ones to avoid,” Jarry said.

And what about the danger on the slopes that are open?

“There’s never zero risk in the mountains but the slopes that are open are normally safe thanks to the work done by those in charge of ski stations to reduce the risk.

“They trigger avalanches on purpose using explosives to reduce the dangers,” he said.

Wait for the snow to settle

National weather agency Météo France points out that avalanches are prone to occur after a snow storm when the snow hasn't yet settled and become packed down with the layer beneath.
Some experts suggest leaving as much as 48 hours before skiing in unmarked areas to reduce the risk of avalanches.
Split the group
The more people in your group, the easier it is to set off an avalanche.
Splitting the groups has a two-fold effect in the case of an avalanche – it means the whole group won't be caught up, and therefore there will be safe parties who can contact authorities or even help with the rescue. Bring the right equipment
If you're heading into known avalanche country, bring the right equipment! This includes an avalanche transceiver, which can help emergency services find you faster.
Also bring an avalanche probe, which helps find people buried, and a shovel. Also bringing warm clothes and food should go without saying.
Check information
Is the area you're skiing known to be dangerous? Have their been avalanches recently? What is the current forecast? Take all this information on board.
The French Alps had already claimed four lives in the past two weeks alone in a series of avalanches and France had launched warnings about the danger in the Alps specifically.

And what to do if caught by an avalanche?

Keep your mouth closed and struggle, move around, do anything possible to stay near the surface as the avalanche is moving. Météo France even suggests making “swimming movements” if possible. Move laterally to escape the path of the avalanche.

When the snow settles, clear a space in front of your face immediately to get maximum oxygen.
Make a note of the location where you last saw anyone, and if you have a cellphone call 112 immediately.
Switch your transceiver to “receive mode” if you are safe to help get contact with other skiers.