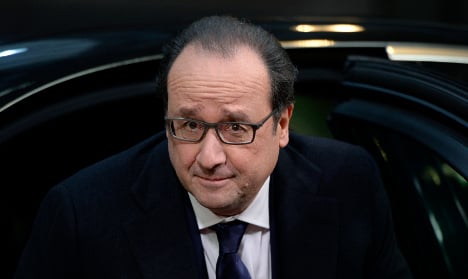 Photo: AFP
Parents in the southern city of Marseille, where Monday's attack “in the name of Allah” added to a string of anti-Semitic incidents in recent months, have begun urging their sons to wear a baseball cap instead.
On Wednesday, French President Francois Hollande said it was “intolerable” for French Jews to have to hide away out of fear of attack.
“It is intolerable that in our country citizens should feel so upset and under assault because of their religious choice that they would conclude that they have to hide,” Hollande said.
The city's top Jewish leader, Zvi Ammar, had on Tuesday called on Jewish men and boys to stop wearing the kippah “until better days”, saying: “Unfortunately for us, we are targeted. As soon as we are identified as Jewish we can be assaulted and even risk death.”
Chillingly, Monday's teenaged assailant, a self-radicalised ethnic Kurd from Turkey, reportedly told police he was “ashamed” that he did not manage to kill his 35-year-old victim when he attacked him with a machete.
The 15-year-old was charged Wednesday with “attempted terrorist murder” and taken into preventive custody.
Government spokesman Stephane Le Foll said earlier that anti-Semitism “unfortunately has gone on for too long and has taken new forms today.”
Several ministers and other politicians spoke out on the issue, with Education Minister Najat Vallaud-Belkacem saying of the idea of shunning kippahs: “It's certainly not the advice I would give, personally.” The 35-year-old teacher, Benjamin Amsellem. Photo: AFP
'Giving up is giving in'
The Marseille Jewish leader's call “clearly was well-intentioned, but it's not the sort of message to send, certainly not now,” Vallaud-Belkacem told French radio.
On Tuesday, top national Jewish leaders also rejected the call to stop wearing the kippah, decrying a “defeatist attitude”.
“We should not give an inch,” said chief rabbi Haim Korsia, while acknowledging that Ammar's call came from an “understandable emotion”.
Joel Mergui, president of France's Israelite Central Consistory, said: “If we have to give up wearing any distinctive sign of our identity, it clearly would raise the question of our future in France.”
Members of the Jewish community in the 19th arrondissement of Paris have also dismissed the call to ditch the kippah, insisting they can’t give in to fear.
“It’s true that people are worried in the community here about anti-Semitism and possible attacks, but it’s nonsense to say don’t wear the kippah,” Yoel Zaoui, who was wearing the headwear, told The Local.
“Just because I take off the kippah doesn’t mean I suddenly don’t become Jewish. If someone wants to attack us they will,” he said.
READ ALSO: France's Jews live in fear, despite the soldiers