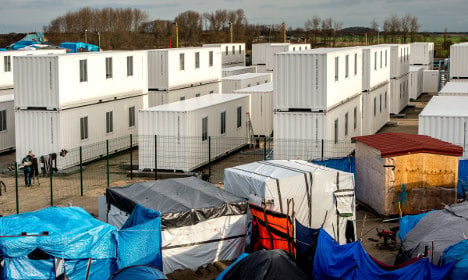 Photo: AFP
Known as The Jungle, the camp in the northern port city of Calais is home to thousands of refugees and migrants who have gathered at the site in the hope of somehow getting to Britain.
With the mild weather ending and the mercury set to plummet, the French authorities are trying to persuade around a quarter of the camp's 4,000 residents to move out of their ramshackle homes into metal shipping containers kitted out with heaters, electrical sockets and cots for babies.
But the plans have been met with defiance, with many people unhappy about leaving an area where they have established a community and concerned that the new security measures involved will be used against them.
Instead of moving into the containers, many migrants were on Thursday picking up their ramshackle tents and shelters and, with the help of activists, moving them deeper into the camp on the back of trucks, an AFP correspondent said.
The aim appeared to be to move their shacks closer together in order to complicate any efforts by the authorities to remove them by force.
Sikander Noristany, a 42-year-old representative of the Afghan community, said people were reluctant to leave behind the shops and cafes they have created in the camp and anxious about being asked to submit palm prints in order to move into the containers. Hand-scan concerns
“They say the new containers are better but there are no showers or kitchens,” he told AFP.
“The main thing people are worried about is the hand scanners… People worry (the hand prints) will be used to send them back here from England.”
Officials insist the system is simply a way of increasing security and deny they are trying to restrict the migrants' movements.
“People do not come to The Jungle to sleep and eat. They are here to try to get to England. They are worried it will be harder to do that from the containers because they look like a prison,” Noristany said.
“A few people have signed up for the new containers but then disappeared. No one I have spoken to wants to go.”
The group that manages the containers said 144 people had signed up to move into the new accommodation and they expected more to join them.
“We are expecting to be accommodating 200 people this evening,” said Stephane Duval, the manager of “Vie active”.