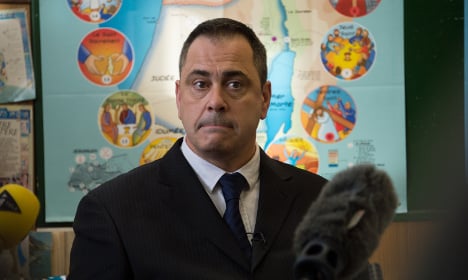 Rob Lawrie before his trial in France began. Photo: AFP
The attempted smuggling took place after the ex-army training instructor was lending a hand at the notorious Calais refugee camp “the Jungle” in late October.
At the request of her father, he decided to try and smuggle the girl, Bahar, back to relatives in the UK.
He was stopped by French border police who found the girl in a sleeping compartment of the truck, and charged Lawrie with “aiding illegal immigration”.
The girl, meanwhile, was returned to the camp in Calais where she remains with her father.
She was in court on Thursday along with her father to support Lawrie, who escaped a prison sentence but was told he would pay a €1,000 fine if he repeated the offence.
Lawrie, a former British soldier apologised to the French court on Thursday saying: “It was irrational, I wasn't thinking clearly. I tried to make sure she could join her family.
“What I did was stupid, I was emotionally exhausted. I am sorry,” he told the court. Rob Lawrie. Photo: Le Parisien/Screenshot
.
Lawrie has attracted public sympathy in the UK where an online petition to free him has been gaining steam. The man, who is the first to admit that his actions were wrong, says he has already suffered.
“It's cost me my family and my job. Financially I am virtually bankrupt,” he said.
He told Le Parisien newspaper that he decided to get involved in Calais after seeing the now famous picture of the dead Syrian three-year-old boy washed up on a Turkish beach.
“That picture changed my life, it made ​​me want to do something. That evening, I took my truck and I came to Calais,” he said.
Lawrie had visited the sprawling camp several times to build shelters for its thousands of residents living there.
During his visits, Lawrie got to know the girl, nicknamed Bru, and her father asked him several times to take her across the Channel before he agreed.
“Who in their right mind would rather a child live in a tent on a chemical dump than allow me to take that one child to her family five miles (eight kilometres) from where I live?” Lawrie told AFP in November.
An online petition calling for the case against Lawrie to be dropped has attracted 120,000 signatures in France and 50,000 signatures in Britain.