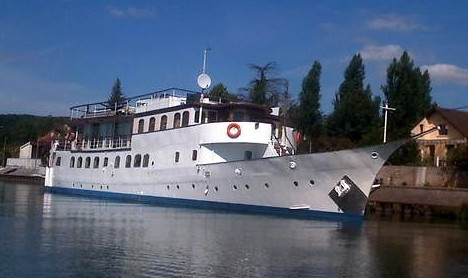 The boat, named The Amazon/Welsh Liberty was built in 1936 and is currently moored in the town of Limay to the west of Paris.

It has been put on sale by Coldwell Banker France, a company which specialises in the sale of luxury castles and villas.

The boat, which boasts 1,000 square metres, was built especially for the former PM at the Thornycroft shipyard on the south coast of England.

Anyon who fancies buying a piece of history would become the proud owner of a boat measuring 41.6 metres in length by 6.4 metres wide. It has three levels measuring a total of 650 metres that are “habitable” and can accommodate up to 60 people.

There are six suites on board for the passengers and 1,000 square metres of terraces or balconies. There’s a bar, of course as well as a meeting room and an office.

Oh and there’s a pool and a jacuzzi on the fourth deck.

And while you’d be forgiven for thinking it might not be in the greatest condition, given the year it was built, there’s no need to worry.

So as long as you have a spare €2million there’s no reason not to pop along to Limay and check it out.