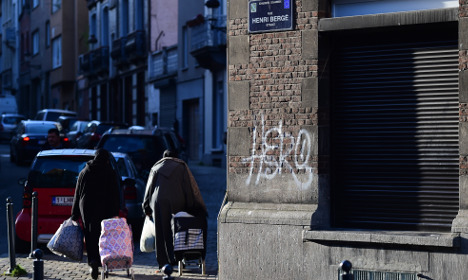 Rue Henri Berge in the Brussels district of Shaerbeek, where the Paris attackers had a safehouse. Photo: AFP

Belgian police have found two apartments and a house used by suspects before they carried out the terror attacks in Paris,
prosecutors said on Wednesday.

“The investigators were able to identify three premises that have been used by the conspiring perpetrators of the attacks of 13th November 2015,”  a spokesman for federal prosecutor Eric Van Der Sypt said in a statement in English.

The premises included a flat in the city of Charleroi where investigators found fingerprints of suspected ringleader Abdelhamid Abaaoud and of Bilal Hadfi, who blew himself up outside the Stade de France on the night of the attacks.

Prosecutors also cited a flat in the Brussels district of Schaerbeek already identified on Friday, and a small house in the rural village of Auvelais, near the French border. The Auvelais house was searched on November 26 and the Charleroi apartment on December 9, they said. No traces of explosives or weapons were found in either of those lodgings.

All of the accommodation was rented using false names and paid for in cash, prosecutors said.

In the case of the Auvelais house, the fake identity was that of a person picked up in Budapest on September 9 by key suspect Salah Abdeslam, who is now on the run.

An international manhunt has been underway for Belgian-born Abdeslam, 26, since suicide bombers and assailants firing automatic weapons killed 130 people and wounded 350 in a wave of attacks across Paris.

Prosecutors on Friday said that one of Abdeslam's fingerprints, three hand-made belts for possible use in suicide attacks and traces of explosives were discovered during a search in December of the apartment in the Schaerbeek.

Inside the flat, in the northern Brussels district of Shaerbeek, were traces of acetone peroxide (also known as TATP), a crystalline powder that can be used to make explosives.
“In the framework of the investigation opened after the Paris attacks the federal prosecutor confirms that during a house search conducted December 10th in an apartment on the third floor, Rue Bergé in Schaerbeek, material that can be used to fabricate explosives as well as traces of TATP were found,” the prosecutor said.
Additionally, prosecutors said the investigation had shown that the Seat Leon car, which was used afterwards to commit the Paris attacks, had stopped in the immediate vicinity of the premises in Charleroi and Auvelais.
All seven terrorists who died in the Paris attacks were wearing suicide bombs.