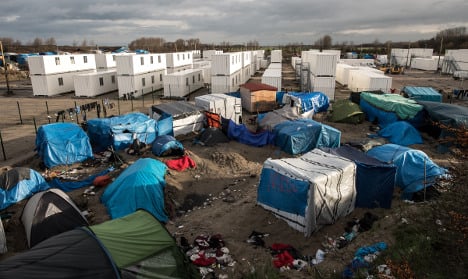 Photo: AFP
The government had planned to move 500-700 migrants and refugees out of the grim makeshift camp into refitted containers with heaters, electricity plugs and cribs for newborns.
But many are reluctant to leave their tents, cafes and shops in the Jungle, and are suspicious about the new camp, which is surrounded by barbed wire and requires a fingerprint scan to come and go.
There is concern that the 125 containers — each holding 12 people — are not nearly enough for the 4,000 people currently estimated to be in the Jungle, who are trying to smuggle their way to Britain by ferry or on cross-Channel trains.
Local official Fabienne Buccio said she understood the “apprehension” about the move.
“Given everything these people have been through before they got here, they don't have any immediate confidence in what's happening,” said Buccio.
Only around 70 people had moved to the containers by Tuesday night.
“It's warm, we're protected from the cold and the wet,” said one, a 44-year-old Afghan accompanied by his wife and six children.
“But how can we live with 12 people in a container, with no shower and no kitchen?”
“It's just a dormitory, where there's nothing to do but sleep,” added aid worker Christian Salome, from NGO L'Auberge des Migrants.
“But at least the families have shelter.”
No enlargement of camp
The authorities have made no secret of their desire to reduce the number of migrants and refugees in Calais.
Buccio said it was “not reasonable” to expect the container camp to be enlarged after it reaches its full capacity of 1,500 people by the end of January.
She also said the major effort to tighten security around the port and Channel Tunnel — making it almost impossible for migrants to smuggle aboard trains and ships heading to England — helped explain the heightened tensions of recent days.
France and Britain have spent millions boosting security since last summer, when there were hundreds of daily attempts to breach the barriers.
There have been concerted efforts to convince migrants in the Jungle to give up their attempts to reach Britain and apply for asylum at centres around France, but only about 2,000 have agreed since October.
Many are drawn by family connections and language to Britain, while the migrants often view France as unwelcoming and with limited economic opportunities.
Only 80,000 people applied for asylum in France last year, compared with 1.1 million in neighbouring Germany.
There are also attempts to relocate 2,500 migrants camped some 40 kilometres (25 miles) up the road from Calais in Grande-Synthe.
On Monday, the mayor of Grande-Synthe said he would move the migrants into higher-quality tents, but the government has been reluctant.
“There has to be a balance between being humane and firm,” said Buccio.
Although migrants have been gathering around Calais for years, the Jungle grew rapidly in early 2015 as the migration crisis took hold.
Most are from warzones such as Syria, Afghanistan and Iraq or fleeing persecution and poverty in African countries such as Sudan and Eritrea.
Numbers peaked at around 6,000 in the summer but have fluctuated as many pay mafia groups to smuggle them aboard lorries crossing the Channel by ferry.
The issue has also become a political priority for the French government after the far-right National Front (FN) of Marine Le Pen gained a record score in the northern region last month.