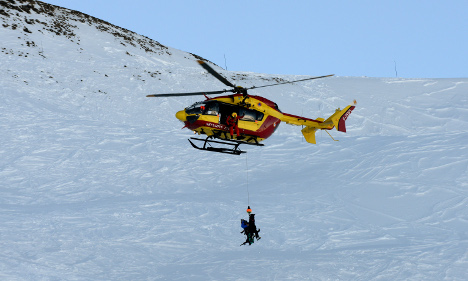 The avalanche was at the ski resort Les Deux Alpes. Photo: AFP
The avalanche occurred at around 4pm on a piste at the ski resort Les Deux Alpes, in Isère (see map below). Local mayor Pierre Balme said the skiers were on a closed piste at the time.
The snow claimed the lives of a 16-year-old girl, and a teenage boy died later in hospital.
The French Interior Ministry confirmed in a statement on Wednesday evening that the third victim was a Ukrainian man, but gave no further details about his identity. It said a further person was seriously injured.
The statement added that all other pupils in the group of 19 pupils and three staff members from the Lycée Saint-Exupéry de Lyon were accounted for and out of danger.
“A judicial inquiry will say why the teacher who was himself injured took (the group) onto a piste which was not open,” French Minister for Youth and Sports Patrick Kanner told reporters.
“How can you think of taking children, following periods of heavy snowfall, onto a piste which was closed?” The dangers of off-piste skiing have made headlines twice this year already, after four skiers have died in three separate avalanches in the French Alps.

Authorities in the Alps have called on those practicing winter sports to take the necessary precautions so as not to put their lives in danger.
Following the accident, French Interior Minister Bernard Cazeneuve released a statement repeating his appeal for people in the area to “exercise the utmost caution” and to follow the instructions of the local authorities.