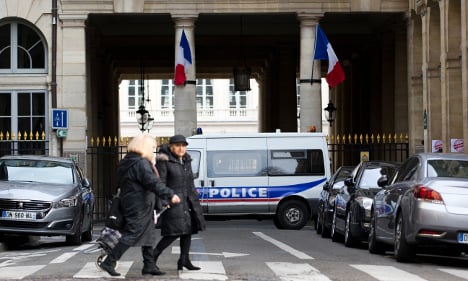 A French police vehicle outside the Constitutional Council in Paris. Photo: AFP
“I challenge what was said, particularly on ethnic profiling,” said government spokesman Stephane Le Foll.
“It is absolutely contrary to what has happened,” he added.
The Council of Europe's human rights commissioner Nils Muiznieks said Tuesday that France's state of emergency could constitute a “threat” to democracy.
“There is a risk that these measures could sap the system of democratic control,” said Muiznieks, citing concerns over ethnic profiling of suspects facing police searches.
But Le Foll said: “The state of emergency was put in place, rules were set in a debate in the National Assembly and they have been strictly respected and applied.”
Under the state of emergency, which has been extended to late February, French police can raid homes and place people under house arrest without judicial oversight.
Nearly seven out of 10 French people said they supported a further extension beyond February, according to a YouGov poll for Huffington Post and iTele published Wednesday.
The government also plans to make it easier to call a state of emergency and protect it from legal challenges by enshrining it in the constitution.
Since the measures came into force after the attacks by radical Islamists in November which left 130 dead and 350 injured, authorities have carried out thousands of searches but “only a few of them have led to procedures linked to terrorist acts,” according to Muiznieks.