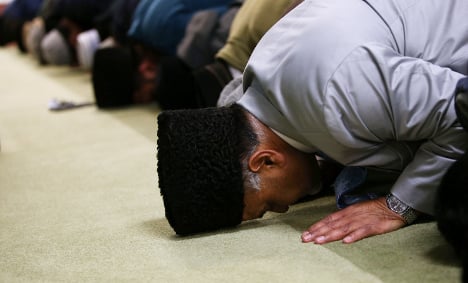 Photo: AFP
“There is no place in the French republic for groups which provoke and which call for terrorism or call for hate,” Cazeneuve said.
The Islamic associations were linked to a mosque in the Paris suburb of Lagny-sur-Marne (pictured below) which was deemed to be “radical” by the French government in December and subsequently closed down.
It was formerly led by the imam Mohamed Hammoumi, known for his radical sermons and who is accused of recruiting volunteers for jihad in Syria.
Cazeuneuve said police found evidence of an unregistered Koranic school and various documents about jihad in the mosque. The Lagny-sur-Marne mosque. Photo: AFP
Another two mosques, one in the suburb of Gennevilliers to the north west of Paris, and one in the city of Lyon, were closed in the wake of the Paris terror attacks.
“Such measures to close mosques because of radicalization have never before been taken by any government, including during the last state of emergency in 2005” after rioting broke out across France's troubled suburbs, Cazeneuve said at the time.
Since the Paris attacks the French government has been under pressure to take a hard line against radical preachers.
Authorities are making use of special powers as part of an official state of emergency in place since the November 13th attacks.
SEE ALSO: Liberté losing out in France's 'war' on terror