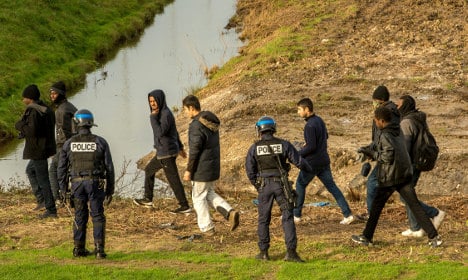 These trenches around the Eurotunnel fences have now been flooded. Photo: AFP
Eurotunnel has quite literally opened the floodgates in the area surrounding their tunnel entrance in northern France.
“The tunnel itself is built on a marshy piece of reclaimed land and it was very waterlogged,” Eurotunnel spokesman John Keefe told The Local.”
“We have let the water level rise and used this to form a network of barriers to stop people from getting to the fences – a way of using the natural environment as a layer of protection.”

While the water may not be so deep, pictures published La Voix Du Nord newspaper show that the water extends across a fairly large stretch of land and far along the fence line.

The flooding comes after the company had cleared over 100 hectares of vegetation in the area in September, in a bid to increase its security capabilities and remove hiding places for migrants, Keefe said.
That move was taken because refugees, most of them living at The New Jungle camp in Calais, were forcefully making their way across the fences into the terminal in an effort to cross the Channel and reach the UK.
At its worst, up to 1,500 refugees were storming the terminal area at once during the summer, forcing security officials to fire tear gas into the crowds.
But the ramp in security, which has also seen the introduction of infra-red cameras, has all but put a stop to the break-ins to the actual tunnel.

In fact, Eurotunnel says there have only been “a tiny handful” that have made it through to the UK.
“The extra security has worked really well after the summer peak. The fencing is difficult to break through or get over, and we also have 460 police providing a strong screen. There have been hardly any break ins since October,” Keefe said.
“It's a dramatic change compared to last summer.”
The last known migrant to make it through the tunnel was 40-year-old Abdul Rahman Haroun, a Sudanese man who was granted asylum after almost walking the whole way through the tunnel in August.
Others were not so lucky. At least 15 people trying to reach the UK have died in the area since June last year.