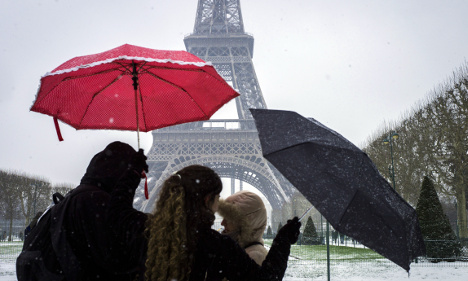 Is Paris set for its first snow of the year? Photo: AFP

After a roasting hot summer, a balmy autumn and a mild start to winter the weather is finally turning cool in France.

The cold temperatures might come as a surprise to many in France given that it’s been a long time since most of the country has had to wear hat and gloves.

On Wednesday the mercury hovered between 1C and 5C for most of the country and between 4C and 8C in coastal areas.

But they will drop by the weekend.

On Friday it will be the east of the country that will feel the cold more than most as temperatures drop to around zero.

On Saturday temperatures in the north of the country and the Paris region could drop as low as -2C, -3C in the east and zero in the south of France.

And the mercury is predicted to drop by an average of a further degree across the country on Sunday.

“It’s going to be a real cold spell, although it won’t be a long cold spell,” said a Météo France forecaster. “It will mark an abrupt change from temperatures in recent months. People may be surprised.”

The cold spell is forecast to end next Thursday, and may see temperatures as low as -9C in the east.
The temperature in the Paris region is predicted to drop to -4C, with a chance of snow.