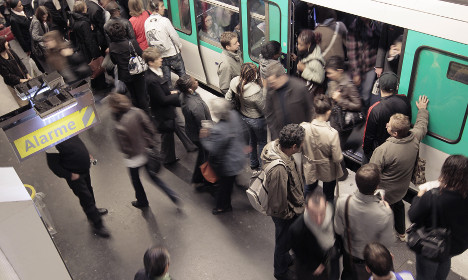 Le Parisien newspaper reported the case this week of a 22-year-old man who has been sentenced to two years in jail for a particularly sordid sex attack on a packed Metro train in Paris.

The man, from the Hauts-de-Seine département to the west of Paris, took advantage of a crowded carriage on the line 13 Metro.

With passengers jammed up against each other as they often are during peak hours on line 13 the man took out his erect penis and rubbed it against a women squashed against him.

She remained trapped by the throng of passengers and could not get off the Metro until two stops down the line at the station Guy Moquet.

After reporting the crime, DNA tests from sperm samples taken from the victim's trousers pointed police in the direction of the culprit.

During a search of his home police realised his technique of sexually assaulting women had been well thought through and planned.

Officers found several pairs of trousers with a 10 cm cut in the crotch area that allowed him to take out his genitals, Le Parisien reported.

As well as his two year prison sentence the man will be forced to undergo therapy and has been banned from taking public transport.

In November France vowed to put a “stop” to the scourge of sexual harassment on public transport by launching a new campaign.

The campaign was launched by secretary of state for women's rights Pascale Boistard and transport secretary Alain Vidalies and comes months after France's High Council on equality (HCEfh) raised the alarm about the issue, when its survey of 600 women in Seine-Saint-Denis and Essonne, two areas in the outer suburbs of Paris, revealed shocking responses.
It found that 100 percent of the women said they had experienced at least some form of gender-based sexual harassment in their life while riding the train.
Url copied to clipboard!