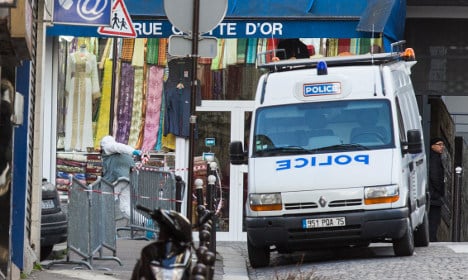 Police in Goutte d'Or after the shooting. Photo: AFP
The man was shot dead by French police on Thursday after he tried to storm a police station in northern Paris, brandishing a meat cleaver and wearing a fake suicide vest.
The assault took place exactly one year since the start of a series of jihadist attacks in France, marked by the killing of 12 people at the Charlie Hebdo satirical magazine on January 7th 2015.
French investigators said on Friday the suspect appeared to have been identified by his family and was said to be a Tunisian named Tarek Belgacem.

On Friday BFM TV published an image of the man, below. The man is reported to have had a colourful past in Europe, cropping on registers across the continent in countries including Italy, Sweden, and Germany. Other reports say he was known to police in Luxembourg.

German investigators reported at the weekend that the man had lived an apartment at a shelter for asylum-seekers in Recklinghausen, in the west of the country.
On Monday, it was revealed that the man had been previously arrested in the German city of Cologne for sexually assaulting a woman, reported German newspaper Bild.
German police said that the attack took place in February 2014 after the man had touched women's “intimate parts”, reported German news agency DPA.
The western German city of Cologne made headlines worldwide this year after police said asylum seekers were behind a spate of sexual assaults and thefts during New Year's Eve festivities, recorded 553 cases of violence during the rampage.
It has been speculated that the man may have even been involved in the New Year's Eve attacks, not least considering he had at least one friend among those arrested.
The man had already been classed by German police as a possible suspect after he posed at the refugee centre with an Isis flag, reported news site Spiegel Online
He had registered with authorities in Europe using several different nationalities, once saying he was Syrian, another time saying he was Moroccan, and on yet another occasion, Georgian.
Paris prosecutor Francois Molins had said the man was carrying a mobile phone with a German SIM card, with French media reporting that it contained several messages in Arabic, some of which were sent from Germany.
The link to a refugee shelter in Germany, and the apparent ease with which the subject was able to file with the authorities, risks further inflaming a debate over the 1.1 million asylum-seekers that the country took in last year.
.