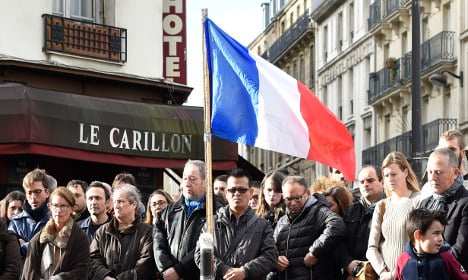 The trendy bar close to Canal Saint-Martin in the 10th arrondissement of Paris has remained closed since it was targeted by gunmen on November 13th.

Some 15 people were gunned down on the terrace of the bar and that of the neighbouring restaurant Le Petit Cambodge.

But staff confirmed to The Local this week that all being well Wednesday will see the doors open again to customers.

“We want to go back to work,” Momo, a member of the Algerian family that owns the bar, told The Local. “What happened happened but now we want to get back to work like before.

“We need to continue to have good times.”

“We just need to wash all the glasses. If it doesn't happen on Wednesday we will be open all day Thursday from 8am,” said Momo.

The bar has been refurbished and cleaned up since the gun attack, with the windows that were left strewn with bullet holes, having been replaced.

Regular customers are expected to flock back to the bar to show their support for what has become something of an institution in that part of Paris.

Le Petit Cambodge restaurant is also due to reopen at the end of the month.

In a message posted on the site's Facebook page at the end of last year staff said: “The Petit Cambodge will reopen, because life has to go on for each of us, but equally out of respect for the clients who on that night were at the restaurant. If we didn't reopen, it would be to give in and to admit defeat which is never going to happen.”

Tow venues targeted in the shootings have already reopened. The Café Bonne Biere (see photo below), which stands on the border between the tenth and the 11th arrondissements, reopened its doors at the beginning of December.

And Comptoir Voltaie on Boulevard Voltaire, where a suicide bomber blew himself up on the night of the attacks has also reopened.