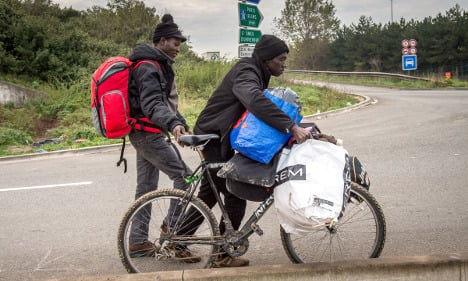 Photo: AFP
Just under a third — 31.5 percent — of the 79,130 applications were successful, said Pascal Brice, the director general of the French agency for the protection of refugees.
The highest number came from people from war-wracked Syria and from Sudan and Kosovo.
“We are seeing asylum requests going up from countries (where people have) a strong need for protection,” Brice told AFP.
The numbers seeking asylum in France have paled compared to those heading for Germany and other northern European countries, which are considered more welcoming and with stronger economies.
Syrians accounted for 5,200 of the asylum applications in France, a 66-percent rise compared to 2014, and almost all were granted asylum.
Sudan saw a 170-percent rise in applications, a figure attributable to the presence of many Sudanese people in camps in the northern French port of Calais.
Many of the 5,060 Sudanese people seeking asylum in France are believed to be those who have given up any hope of reaching Britain through the Channel Tunnel.
Kosovo also saw a sharp rise in applications, with 4,650 people, a year-on-year rise of 92 percent, seeking asylum in France.