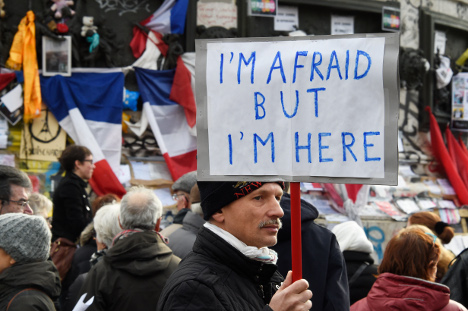 Photo: AFP
People attending the event in the Place de la Republique were searched by armed police before standing around a simple stage and a monument covered in the red, white and blue French flag.
President Francois Hollande unveiled a plaque next to an oak tree planted in the square in memory of the victims of the jihadist outrages that rocked France in 2015, beginning with the shootings at Charlie Hebdo.
Veteran rocker Johnny Hallyday performed a short song and the army's choir gave a rousing rendition of the Marseillaise. The mayor, the president, and the prime minister unveil a memorial plaque. The plaque is dedicated to the victims of the terror attacks in both January and November. The families of the victims and survivors at the rally. People gather around a “remembrance tree”, an oak planted at the west end of the Place de la Republique square in honour of the attack victims.