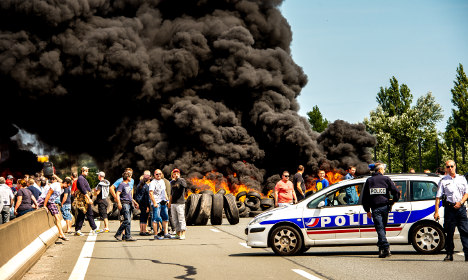 Striking employees of the My Ferry Link company block the access to the Calais harbour in July, 2015. Photo: AFP
Love it or hate it – the French are big fans of a good old strike.
Indeed, there were a total of 966 across France in 2015 (that's 2.6 a day!), according to the site cestlagreve.fr, which records the nation's industrial action in real time.
These consisted of mostly regional affairs, although there were 93 national strikes and three general strikes.
While it may sound like a lot, the figures were actually down on recent years, most likely due to a change in mentality spurred by fear of job losses and the unions' loss of influence, reported Le Figaro newspaper.
The study also found that the most common time for a strike was in June and September, months that are the bookends to the summer holidays.

The least popular time was in July and August, when a large proportion of the French take an extended break and head on holiday.
Strikes are most common in the big cities, with Paris proving the most popular, followed by the Bouches-du-Rhône departement (which includes Marseille) and Rhône (which includes Lyon).
Strikes most commonly occurred in the public sector, followed by the private, transport, and education sectors.
The services most affected by the strikes, according to the site, were health, industry, postal, transport, and the national railway system SNCF.
The website tracks strikes that are ongoing across France, as well as any that are scheduled to crop up in the future.
A spokesperson from the site said that it has no union or political ties, but that the team merely wants to help the rest of the country to stay ahead of the game.
“Like many fellow citizens, I hate to find out about a strike too late and always want to avoid any nasty surprises,” said Bertrand Lambert.
On Monday, the site reported that there are at least 15 ongoing strikes in France, including everything from firefighters in northern France's Caen to a pilot's union strike at Air France.
The calendar below gives a taste of the strike climate in France this week. In the interest of saving space, it has been cropped short – the full calendar for this week continues far longer. See it here. There were plenty of high profile strikes in 2015, including everything from ferry workers who blockaded the port of Calais in the summer, to strikes by doctors, hospital workers, farmers, teachers, taxi drivers, and rubbish collectors.
Perhaps the most well remembered of all was Air France workers whose protest ended with two company execs fleeing half naked. But things could be changing. The most recent statistics from the Ministry of Labour show there is less industrial action that at any time since the beginning the financial crisis in 2008.

Despite pay freezes and job losses linked to the crisis, only 1.2 percent of private companies (with over ten employees) were hit by strikes or walk-outs in the year 2013 – the most recent year for which figures are available.