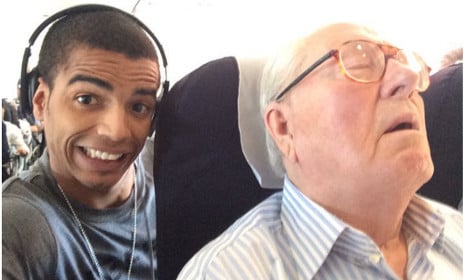 The image was snapped by the ex-partner of Madonna Brahim Zaibat, a professional dancer and former winner of the Dancing with the Stars show.

Brahim was sitting behind Le Pen on the plane and took advantage of the former National Front leader’s snooze to snap a photo.

He then shared the photo on Facebook, Instagram and Twitter urging the public to vote against the National Front in the second round of December’s regional elections.

“Let’s all vote tomorrow to give them a knock-out blow. To preserve our fraternal France,” was the message sent out by the dancer and quickly gained tens of thousands of likes and retweets.

The following day the National Front failed to win a single region in the elections despite being ahead in six out of the 13.

Le Pen said the photo “harmed his image and was instrumental in the defeat of the party led by Marine,” wrote the magazine Public, which revealed the veteran politician’s plans to sue.

He is also demanding that Brahim take to social media and publish an apology to Le Pen. And if the apology is not forthcoming he is threatening to sue him for €10,000 each day that goes by until he eventually says sorry.

The hearing is due for January 22nd.

Until then Jean-Marie Le Pen would be wise not to fall asleep when he takes a plane.