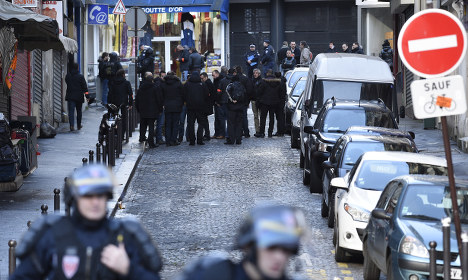 French police near the Rue de la Goutte d'Or last week, after police shot a man dead as he was trying to enter a police station. Photo: Lionel Bonaventure/AFP

The individual was shot dead by French police on Thursday after he tried to storm a police station in northern Paris, brandishing a meat cleaver and wearing a fake suicide vest.

The assault took place exactly one year since the start of a series of jihadist attacks in France, marked by the killing of 12 people at the Charlie Hebdo satirical magazine on January 7 2015.

On Saturday, German investigators assisting the probe into the police-station attack raided an apartment at a shelter for asylum-seekers in Recklinghausen, in the west of the country.

Their statement gave no other details except to say no indications were found that other attacks had been planned.

A source close to the matter told AFP that the suspect had been registered as an asylum-seeker.

The news site Spiegel Online reported, meanwhile, that the man had already been classed by German police as a possible suspect after he posed at the refugee centre with an IS flag, but he disappeared in December.

Welt am Sonntag said the man had drawn a symbol of the Islamic State organisation on the shelter's wall.

He had used different names in separate registrations with German authorities, and filed for asylum using the name Walid Salihi, according to the newspaper.

The man had also given different nationalities at each registration, once saying he was Syrian, another time saying he was Moroccan, and on yet another occasion, Georgian.

But French investigators said Friday the suspect appeared to have been identified by his family and was said to be a Tunisian named Tarek Belgacem.

Paris prosecutor Francois Molins had said the man was carrying a mobile phone with a German SIM card, with French media reporting that it contained several messages in Arabic, some of which were sent from Germany.

In Tunisia, a woman who claimed to be the man's mother confirmed that he had been living in Germany but denied he had any links to extremist groups.

She told a Tunisian radio station that her son had rang her to ask her “to send him his birth certificate. He was in Germany.”

The link to a refugee shelter in Germany, and the apparent ease with which the subject was able to file with the authorities, risks further inflaming a debate over the 1.1 million asylum-seekers that the country took in last year.

Mindful of the political sensitivity surrounding the issue, Recklinghausen's mayor Christoph Tesche said it remains “our humanitarian and legal duty to provide shelter for those who flee their homes”.

But it was also equally important to work “intensively with relevant authorities to ensure that people with such intentions cannot hide in our institutions,” he stressed.

Tensions were already running high after a spate of sexual assaults and thefts during New Year's Eve festivities in the western city of Cologne, with police saying suspects of the crime spree were mostly asylum seekers and migrants.

Cologne police said Saturday that they have recorded 379 cases of violence during the rampage that night, as far-right protests erupted in the western city against the assaults.

The latest link to the attacker in France risks fanning fears that would-be terrorists were slipping into Europe's biggest economy amid a record refugee influx.

Such concerns were already raised when it emerged that two of the suicide bombers in the November 13 attacks in Paris were carrying passports that had been registered as they arrived on a Greek island with a group of migrants in October.

However, French investigators are not convinced that the two men, who blew themselves up near the Stade de France stadium, were the men in the passports.