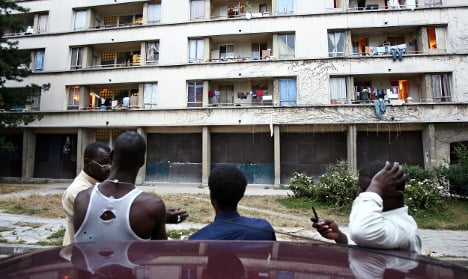 A group of people chat in front of a building housing a giant squat in Cachan, Southern Paris Suburbs. Photo: AFP
“Integration is a one-way street,” whereby immigrants want to be a part of the French social fabric only to be regarded as perpetually foreign and to suffer discrimination, Cris Beauchemin, the study's author, told AFP.
The issue of the integration of its immigrant population is under the microscope in France following a string of jihadist attacks, some carried out by young men who grew up in France but whose parents came from North Africa or West Africa.
Beauchemin said the in-depth study by INED and the National Statistics Institute (INSEE) that looked at 22,000 case studies showed that second-generation immigrants often fared less well than the first generation.
Asked if they or their offspring “feel French” or “feel at home in France”, 93 percent of second-generation respondents said they did.
Yet Beauchemin, a researcher at the National Institute of Demographic Studies (INED), said many felt the French often left them in no doubt as to their “otherness” status.
“Frenchness is not attributed on the basis of nationality or cultural codes such as language” but visually, to the degree that “they look French”.
That is a drawback for “visible minorities” such as Africans and Asians, unlike most descendants of Europeans.
More than half of immigrants from Africa, even following naturalisation, “think people do not regard them as French,” the study found.
This created an identity disconnection which “persists, or even deepens, as generations go by.”
Such findings go against previously accepted assimilation theory suggesting that “immigrants suffer stigmatisation but eventually that goes away. No it doesn't,” says Beauchemin.
That was why second-generation immigrants did less well than their parents.
On the socio-cultural side, comprising factors such as family and language, “we are seeing progress from one generation to another”.
“But in socio-economic aspects where there are barriers, such as school or employment, there is a sense of things getting worse,” Beauchemin said.
School penalty
The phenomenon is especially true of boys.
“Several indicators show that the sons of migrants as being in inferior situations to those of the migrants themselves,” says the study, although the reverse is true for girls.
The study underlines the importance of schooling in integration.
Among “visible minorities,” a third of boys leave school without basic secondary school qualifications.
They are then “highly disadvantaged” in the labour market, says Beauchemin.
Although not giving a reason why, the researchers detected a “discriminatory” approach by schools towards boys “based on their origin”.
They drew similar conclusions for working life with men of migrant origin often earning less than their French counterparts. However, there was less of a gap between earnings for French women and their immigrant counterparts.
The study further found “more frequent” racism and discrimination towards male migrants.
The investigation showed 47 of migrants of sub-Saharan origin, 32 percent of Moroccans and 30 percent of Algerians said they had suffered discrimination.
The study, based on figures from 2008 and 2009, does not look at third-generation migrants, who are more difficult to quantify.